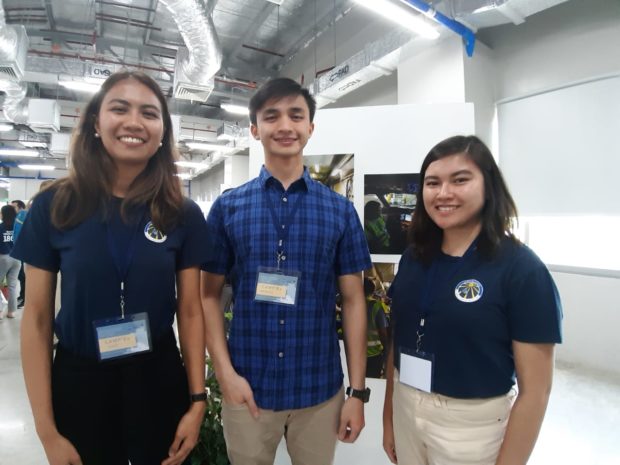 From left to right: Climate scientist Julie Dado and research assistants Miguel Hilario and Paola Banaga. They are all part of the forecasting team of the Cloud, Aerosol, and Monsoon Processes – Philippines Experiment (Camp2Ex) program of Nasa, the US Naval Research Laboratory, and Manila Observatory. INQUIRER.net photo / Neil Arwin Mercado

MANILA, Philippines — Amid the changing climate, several young Filipino scientists are taking part in a US project that seeks to help improve weather and climate forecasting by delving into the dynamics between aerosol particles and clouds.

Paola Banaga and Miguel Hilario are two of the young Filipino scientists who are members of the forecasting team of the Cloud, Aerosol, and Monsoon Processes – Philippines Experiment (CAMP2Ex) program. Both are research assistants from the Manila Observatory.

CAMP2Ex is a research project of the National Aeronautics and Space Administration (Nasa), US Naval Research Laboratory (NRL), and Manila Observatory, which seeks to study the dynamics of aerosol particles on cloud properties and precipitation, and their impact on weather and climate.

For Banaga, working with international scientists with years of expertise and experience may seem like a daunting task, but the scientists whom she works closely with never made her feel like a “new blood” in the field of science.

“Even though we have high-caliber scientists here. They treat us as if we are on the same level. It’s okay if we say we don’t know because they themselves, they don’t know as well. So we are all figuring it out together,” Banaga said in the sidelines of the project’s freestyle talk and photo exhibit event at the Ateneo de Manila University.

In fact, Banaga has since become the first Filipina to fly in the sky and collect data as a part of one of the project’s focus areas — aerosol and cloud microphysics.

“For my experience, I am really humbled and it’s really been an honor,” Banaga said.

“Being part of Camp2Ex it’s really like being in a classroom with only the best professors that you have so you get to interact with those authors that you just read on journal articles. It’s fun working with them, it’s a great experience,” she added.

Likewise, Hilario views each day of the project as another day to learn. He finished his undergraduate degree in applied physics and material science engineering only last June.

“There’s a number of scientists who are world-class experts at what they do so there’s so much to learn everyday and for the past six weeks we have just been quick on our feet, willing to learn whatever needs to be learned,” Hilario said.

“They’ve been accommodating and friendly and very inclusive so they’ve been really included us in the flight planning and forecasting process,” he added.

Meanwhile, climate scientist Julie Dado, who is also a part of the forecasting team, may have more years in the sciences, but she considers the project as a “boot camp” where one learns with first-hand experience.

Like Banaga, she also joined one of the flights during the data gathering process.

“Managing such a huge campaign, with huge stakes at hand is a huge experience for everyone. The exchange of learning with each other, we get to learn from them, we know more about the conditions here in the region also because we are talking to them,” Dado said.

“They are very open. You just go to them, ask them a question even if you think it is really really stupid, they just won’t let you feel that way,” she added.

Program scientist Hal Maring from Nasa explained that predicting the weather and climate patterns is dependent on several factors.

Maring also underscored the importance of the maritime continent especially amid the rise of large cities and human pollution.

The data from the project will be uploaded to NASA’s archives, which will be accessible to the public.

Maring said scientists who wish to conduct similar projects in the future can likewise make a comparison and see how the Earth’s system in the vicinity of the Philippines had changed through the years.

Further, Maring added that the project could also help in policy-making, as public officials would have a solid scientific basis on which to make their decisions.

Philippine science lead Gemma Narisma, meanwhile, underscored the importance of the data, especially in improving weather and climate forecasts which could help in several sectors in the country including the agriculture sector.

“Farmers rely on them during the monsoon season. What we are trying to understand now is how aerosols affect that rain during this monsoon season? And whatever comes out of it, will be important for the Filipinos,” Narisma said.

Philippine project leader from the Manila Observatory, James Simpas, said the project would also help create new, if not improve existing, models used in the country.

“The data that we have is unprecedented so it really is a rich trove of data from which we can hone the models and hopefully produce better models,” Simpas said. /jpv