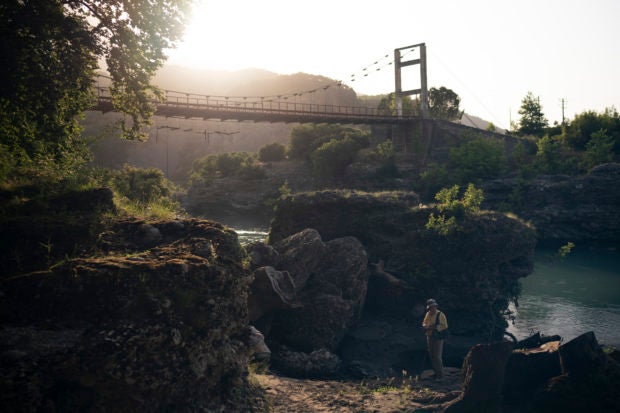 In this June 14, 2019 photo, Jorgji Ilia, 71, stands on the shore of the Vjosa River after collecting water from a small spring in the village of Kanikol, Albania. Image: AP/Felipe Dana

ALONG THE VJOSA RIVER — Under a broad plane tree near Albania’s border with Greece, Jorgji Ilia fills a battered flask from one of the Vjosa River’s many springs.

“There is nothing else better than the river,” the retired schoolteacher says. “The Vjosa gives beauty to our village.” 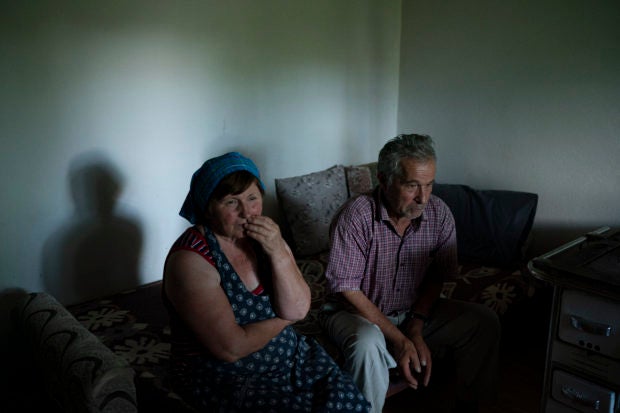 In this June 19, 2019 photo, Jorgji Ilia, 71, a retired schoolteacher, sits with his wife, Vito, 64, inside their home in the village of Kanikol, Albania. Image: AP/Felipe Dana

The Vjosa is temperamental and fickle, changing from translucent cobalt blue to sludge brown to emerald green, from a steady flow to a raging torrent. Nothing holds it back for more than 270 kilometers (170 miles) in its course through the forest-covered slopes of Greece’s Pindus mountains to Albania’s Adriatic coast.

This is one of Europe’s last wild rivers. But for how long? 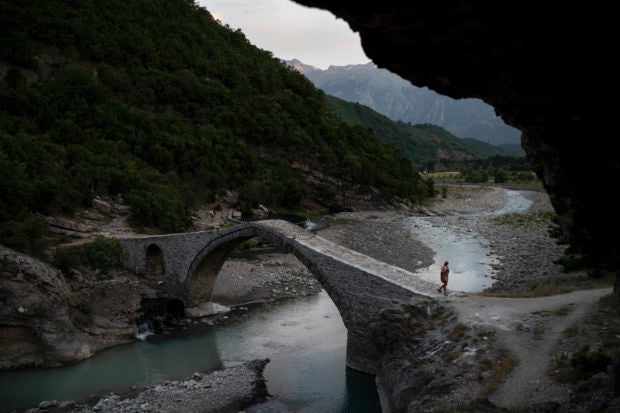 In this June 18, 2019 photo, a man crosses a bridge over the Langarica River, a tributary to the Vjosa near the city of Permet, Albania. Image: AP/Felipe Dana

Albania’s government has set in motion plans to dam the Vjosa and its tributaries to generate much-needed electricity for one of Europe’s poorest countries, with the intent to build eight dams along the main river.

It’s part of a world hydropower boom, mainly in Southeast Asia, South America, Africa and less developed parts of Europe. In the Balkans alone, about 2,800 projects to tame rivers are underway or planned, says Olsi Nika of EcoAlbania, a nonprofit that opposes the projects. 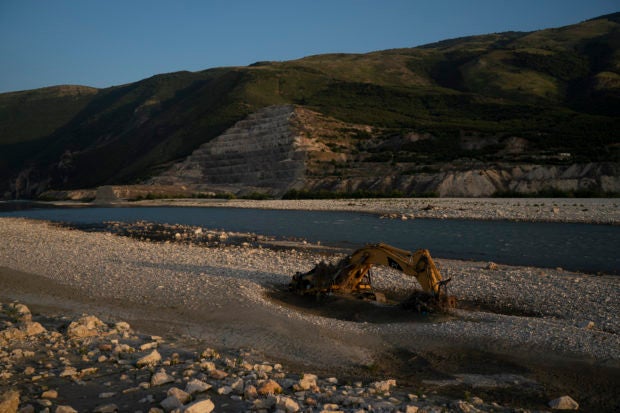 In this June 23, 2019 photo, an abandoned bulldozer sits on the banks of the Vjosa River at the construction site of the Kalivac dam in Albania. Image: AP/Felipe Dana

Some tout hydropower as a reliable, cheap and renewable energy source that helps curb dependence on planet-warming fossil fuels. But some recent studies question hydropower’s value in the fight against global warming. Critics say the benefits of hydropower are overstated — and outweighed by the harm dams can do.

Rivers are a crucial part of the global water cycle. They act as nature’s arteries, carrying energy and nutrients across vast landscapes, providing water for drinking, food production and industry. They’re a means of transportation for people and goods, and a haven for boaters and anglers. Rivers are home to a diversity of fish — including tiny minnows, trout and salmon — and provide shelter and food for birds and mammals. 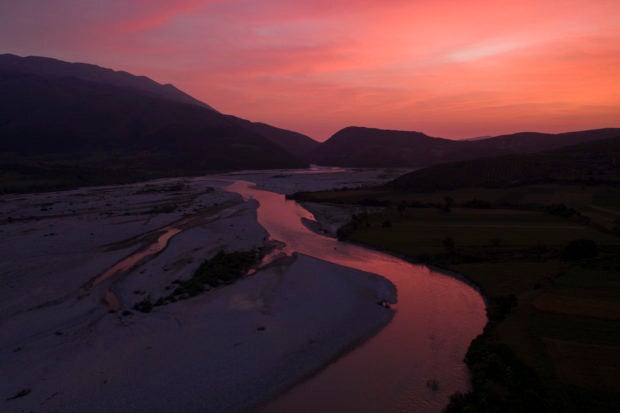 In this June 16, 2019 aerial photo, the sun sets behind the Vjosa River near Tepelene, Albania. Image: AP/Felipe Dana

But dams interrupt their flow, and the life in and around them. While installing fish ladders and widening tunnels to bypass dams helps some species, it hasn’t worked in places like the Amazon, says Julian Olden, a University of Washington ecologist.

Dams block the natural flow of water and sediment. They also can change the chemistry of the water and cause toxic algae to grow.

Those who live along the riverbank or rely on the waterway for their livelihood fear dams could kill the Vjosa as they know it. Its fragile ecosystem will be irreversibly altered, and many residents will lose their land and homes. 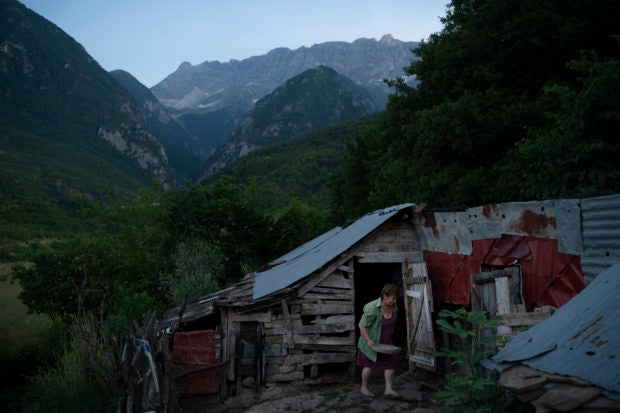 In this June 19, 2019 photo, Vito Ilia, 64, walks out of a small cowshed outside her home in the village of Kanikol, Albania. Image: AP/Felipe Dana

In the 1990s, an Italian company was awarded a contract to build a dam along the Vjosa in southern Albania. Construction began on the Kalivac dam, but never was completed, plagued with delays and financial woes.

Now, the government has awarded a new contract for the site to a Turkish company. Energy ministry officials rejected multiple interview requests to discuss their hydropower plans. 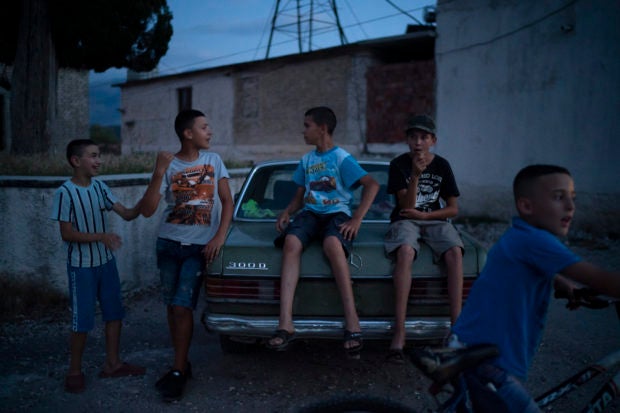 n this June 26, 2019 photo, children play outside at dusk in the village of Kute, Albania. The village overlooks the Vjosa River as it snakes its way north to the sea. Residents here joined a lawsuit against the Pocem dam that would flood their fields, some houses and, crucially for many, a cemetery. Image: AP/Felipe Dana

Many locals oppose the plans. Dozens of residents from the village of Kute joined nonprofits to file what was Albania’s first environmental lawsuit against the construction of a dam in the Pocem gorge, a short distance downriver from Kalivac. They won in 2017, but the government has appealed.

The victory, while significant, was just one battle. A week later, the government issued the Kalivac contract. EcoAlbania plans to fight that project, too. Ecologically, there is a lot at stake.

A recent study found the Vjosa was incredibly diverse. More than 90 types of aquatic invertebrates were found in the places where dams are planned, plus hundreds of fish, amphibian and reptile species, some endangered and others endemic to the Balkans. 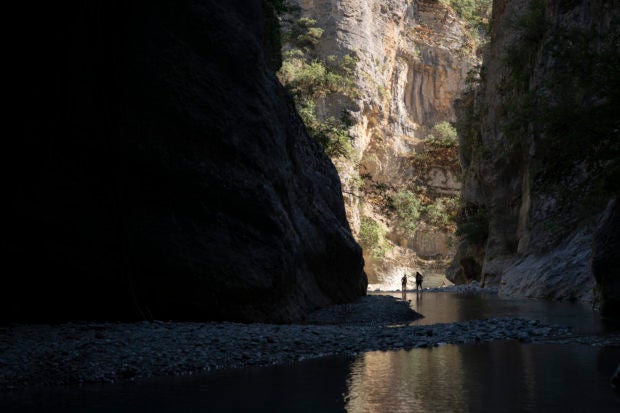 In this June 20, 2019 photo, people walk along the Langarica River, a tributary to the Vjosa near Permet, Albania. Image: AP/Felipe Dana

Dams can unravel food chains, but the most well-known problem with building dams is that they block the paths of fish trying to migrate upstream to spawn.

As pressure to build dams intensifies in less developed countries, the opposite is happening in the United States and western Europe, where there’s a movement to tear down dams considered obsolete and environmentally destructive.

More than 1,600 have been dismantled in the U.S., most within the past 30 years, according to the advocacy group American Rivers. In Europe, the largest-ever removal began this year in France, where two dams are being torn down on Normandy’s Selune River. 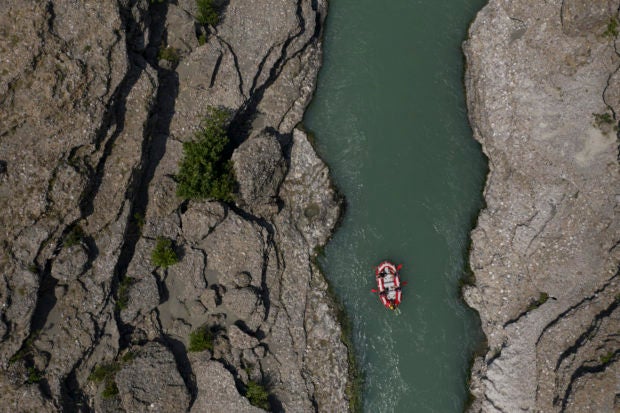 In this June 25, 2019 photo, people raft on the Vjosa River near Permet, Albania. Image: AP/Felipe Dana

With so few wild rivers left around the globe, the Vjosa also is a valuable resource for studying river behavior.

“Science is only at the beginning of understanding how biodiversity in river networks is structured and maintained,” says researcher Gabriel Singer of the Leibniz-Institute in Germany. “The Vjosa is a unique system.”

For Shyqyri Seiti, it’s much more personal. The 65-year-old boatman has been transporting locals, goods and livestock across the river for about a quarter century. The construction of the Kalivac dam would spell disaster for him. Many of the fields and some of the houses in his nearby village of Ane Vjose would be lost. 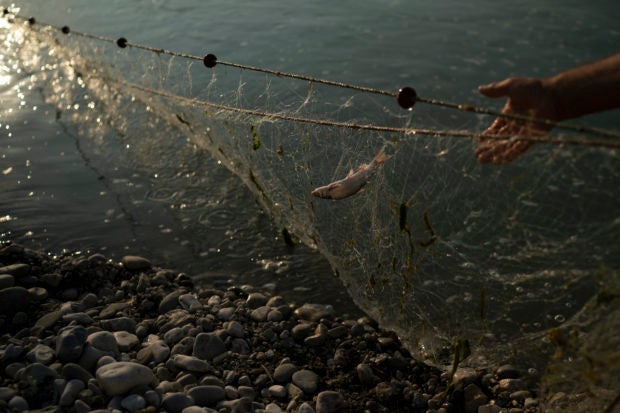 “Someone will benefit from the construction of the dam, but it will flood everyone in the area,” he says. “What if they were in our place, how would they feel to lose everything?”

But the mayor, Metat Shehu, insists his community “has no interest” in the matter.

“The Vjosa is polluted. The plants and creatures of Vjosa have vanished,” Shehu says. The biggest issue, he adds, is that villagers are being offered too little to give up their land. He hopes the dam will bring investment to the area.

Jonus Jonuzi, a 70-year-old farmer who grew up along the river, is hopeful the Vjosa will stay wild.

“Albania needs electrical energy. But not by creating one thing and destroying another,” he says. “Why do such damage that will be irreparable for life, that future generations will blame us for what we’ve done?” IB/JB

Duterte: Pasig River can no longer be cleaned

Little ‘earth defenders’ get trained to save environment