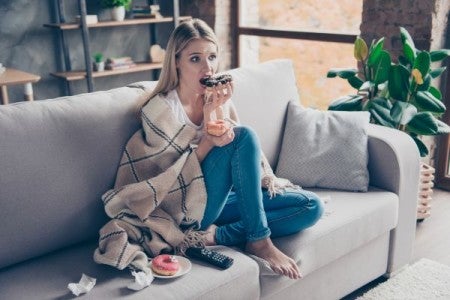 According to the study, “sorrow fat” may not actually be as common as we think. Image: Deagreez/IStock.com via AFP Relaxnews

A group of American researchers has concluded that compensating for emotional heartbreak by overeating may not actually have much impact on weight gain.

In the film “Bridget Jones’ Diary” (2001), Renée Zellweger, camped out on her sofa in her pajamas and eats ice cream directly from the pint container after a romantic breakup. Soothing oneself with comfort food is a classic remedy, but one that risks leaving us a lasting souvenir, supposedly in the form of excess body weight.

But does this phenomenon really exist? To better analyze the question, researchers from Penn State Harrisburg in the United States surveyed 581 volunteers. They responded to an online questionnaire regarding breakup behaviors, eating habits and possible weight gain.

Published in the Journal of the Evolutionary Studies Consortium, the study’s results show that a large proportion of the participants (62.7%) did not report gaining weight after a breakup. According to lead researcher Maria Harrison, this may signify that the occurrence of “sorrow fat” may not be as common as we think.

A connection only seen in women are already prone to “emotional eating.”

To test their theory, Prof. Harrison’s team conducted a second study with 261 new participants. As in the first, the new survey asked participants if they had already experienced a breakup after a long-term relationship and if they had gained or lost any weight thereafter.

The researchers also asked about the emotions and attitudes of the respondents regarding their ex-partner (degree of commitment to the relationship, who initiated the breakup, etc.) as well as if they had a tendency towards emotional eating and what their attitudes towards food were in general.

Once again, while all of the survey participants affirmed having experienced a painful breakup at some point in their life, the majority (65%) did not experience a change in their weight after the separation.

“We were surprised that in both studies, which included large community samples, we found no evidence of kummerspeck (emotional weight gain),” Harrison said. “The only thing we found was in the second study, women who already had a proclivity for emotional eating did gain weight after a relationship breakup. But it wasn’t common.”

“But our research showed that while it’s possible people may drown their sorrows in ice cream for a day or two, modern humans do not tend to gain weight after a breakup,” she concluded. IB/JB

Brooklyn Nets star Kevin Durant: ‘My season is over’