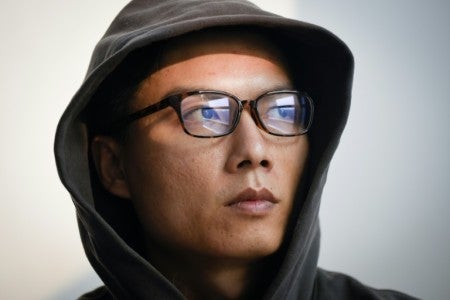 China’s millennials are increasingly pursuing happiness and sustainable living rather than wealth and luxury, award-winning sci-fi writer Chen Qiufan says, insisting the nation’s youth are waking up to environmental issues.

His acclaimed dystopian novel “Waste Tide”, which depicted workers picking through toxic electronic detritus and children playing with discarded bionic limbs, served as a warning to his country at a time when it was the world’s rubbish dump, and its most vulnerable communities bore the brunt of the West’s voracious consumer culture.

But in the seven years since it was first published, China has started to take action — banning the import of most plastic recyclables and other materials in January 2018 — and Chen says its citizens have become far more engaged about protecting the environment.

“The younger generation are paying more and more attention to this issue,” says Chen, a former Google employee.

He believes that many young people in China have shrugged off concerns around money that preoccupy their parents, who lived through the turmoil and aftermath of the Cultural Revolution.

“They’re pretty much relaxing about how to get rich and are focused on living a more happy, healthy, eco-friendly lifestyle,” the 37-year-old says.

Although China’s Greta Thunberg is unlikely to emerge anytime soon given the Communist regime’s restrictions on protest movements, Chen says there’s a growing tide of interest in environmental symposiums and exhibitions in cities like Beijing and Shanghai.

Many of his friends are beginning to feel guilty about flying, he admits. 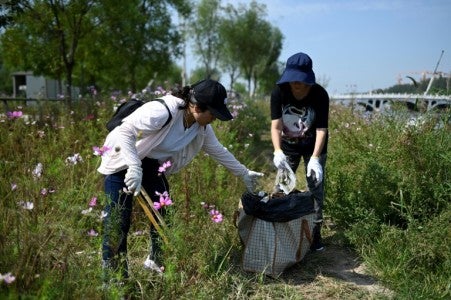 Chinese are showing their concern online too. Ant Forest, an Alipay mobile game that rewards users for adopting more environmentally friendly lifestyles by planting actual greenery, has led to around 122 million new trees in the ground since 2016, according to the United Nations.

Speaking ahead of an appearance at the Hong Kong International Literary Festival in November, Chen told AFP his own passion for environmental issues was sparked by learning of the town of Guiyu — a waste site for the developed world’s electronic junk that was once branded an “environmental calamity” by the U.N.

Despite growing up just 60 kilometers (40 miles) away in the southeastern city of Shantou, he had barely heard of the e-waste hub where tens of thousands of poor workers dismantled discarded TVs, mobile phones and batteries — often with no protective gear, leaving them directly exposed to toxic chemicals.

“There was a childhood friend who worked for an American recycling company and he told me about this place Guiyu,” explains Chen, one of the stars of China’s flourishing science fiction scene.

“I went there and it was totally shocking. They (the workers) suffered very low pay, they were infected by toxic air, water and soil,” he adds.

He began to question the throwaway culture of the developed world.

“Waste is basically invisible in many ways, you dump it into the trash and it just disappears and that’s how our urban life functions,” he muses. “But actually somebody is suffering from this.”

An alumnus of prestigious Peking University, Chen is among of crop of talented Chinese sci-fi writers who are asking questions of their fast-changing country and the wider world — and finding literary success.

Fellow novelist Hao Jingfang’s “Folding Beijing”, a tale of class inequality that echoes the real-life struggles of migrants in the Chinese capital, bagged a Hugo Award in 2016 and Chen has claimed a string of prizes in China.

In Chen’s work, as well as discussing the degradation of the environment and its poisonous effect on the poorest, he critiques our increasing reliance on tech and its ramifications on society.

He worries a lot that technology could increase inequality in China.

“We can see a lot of kids in the countryside who are very poor and they basically use their phone to play games to kill time because their parents are all working in the cities to make some money.

“But for those kids that are living in the city — from middle-class, well-educated families — they are mostly limited to using the tech for education purposes. So that makes the gap bigger and bigger,” he says.

But ultimately it’s the whole global system that he thinks need to change, with tighter regulation around both tech and the culture of materialism that is driving the toxic waste problem — now a nightmare China’s poorer Southeast Asian neighbors must deal with.

He adds: “The issue is not resolved, it’s just transferred. It’s always there, switching from one backyard to another.” IB/JB

Seychelles leader: No time for ‘blame game’ in climate fight