In this undated photo provide by the Greek Culture Ministry on Tuesday, Oct. 5, 2019, the outlines of recently discovered buildings on the Mycenaean citadel of Glas in Greece are seen from the air. Archaeologists excavating a vast 3,300-year-old fortress northwest of Athens are hoping to shed light on one of the most impressive engineering feats of ancient Greece. The Culture Ministry says the results of work at Glas, a low, flat hill commanding a sprawling plain, have been “particularly encouraging,” revealing meticulously-planned building complexes. (Greek Culture Ministry via AP)

ATHENS, Greece — New excavations at an unusual prehistoric fortress northwest of Athens could hold the key to understanding one of ancient Greece’s most impressive engineering feats, which converted a lake into rich farmland 3,300 years ago.

The acropolis of Glas, with its three-kilometer (1.9-mile) fortification walls, is the biggest of its era in Greece. It dates to the same time as the nearby land reclamation works and was an integral part of the overall project.

But both were abandoned only a few decades later, possibly due to a changing climate, and never re-used.

According to Greece’s Culture Ministry, the results of the past two years’ work at Glas, a low, flat hill in the corner of a large plain some 115 kilometers (70 miles) from Athens, have been “particularly encouraging.”

Finds included a precisely designed six-building complex that looks as if it has marched straight off a developer’s blueprint. That’s unlike the looser sprawl seen in the famous contemporary citadels of Mycenae and Tiryns, each a fraction of Glas’ size but much greater in importance and power.

The Mycenaean civilization dominated much of Greece from around 1600-1100 B.C. and may have provided material for Homer’s epic poems, the Iliad and the Odyssey, as well as later Greek legends. It functioned through a series of regional administrative centers, usually with a palace surrounded by workshops and storerooms.

Lead excavator Elena Kountouri told The Associated Press Thursday that some recently discovered buildings at Glas appear to have been built for storage, “possibly on a household level,” while others seem to have been workshops or their storage areas. Each of the six 2,600-square-foot buildings has precisely the same dimensions, is equidistant and broken up into three equal sections.

“They look as if they would have housed a large number of people, but why and to what purpose we can’t say yet,” Kountouri said. 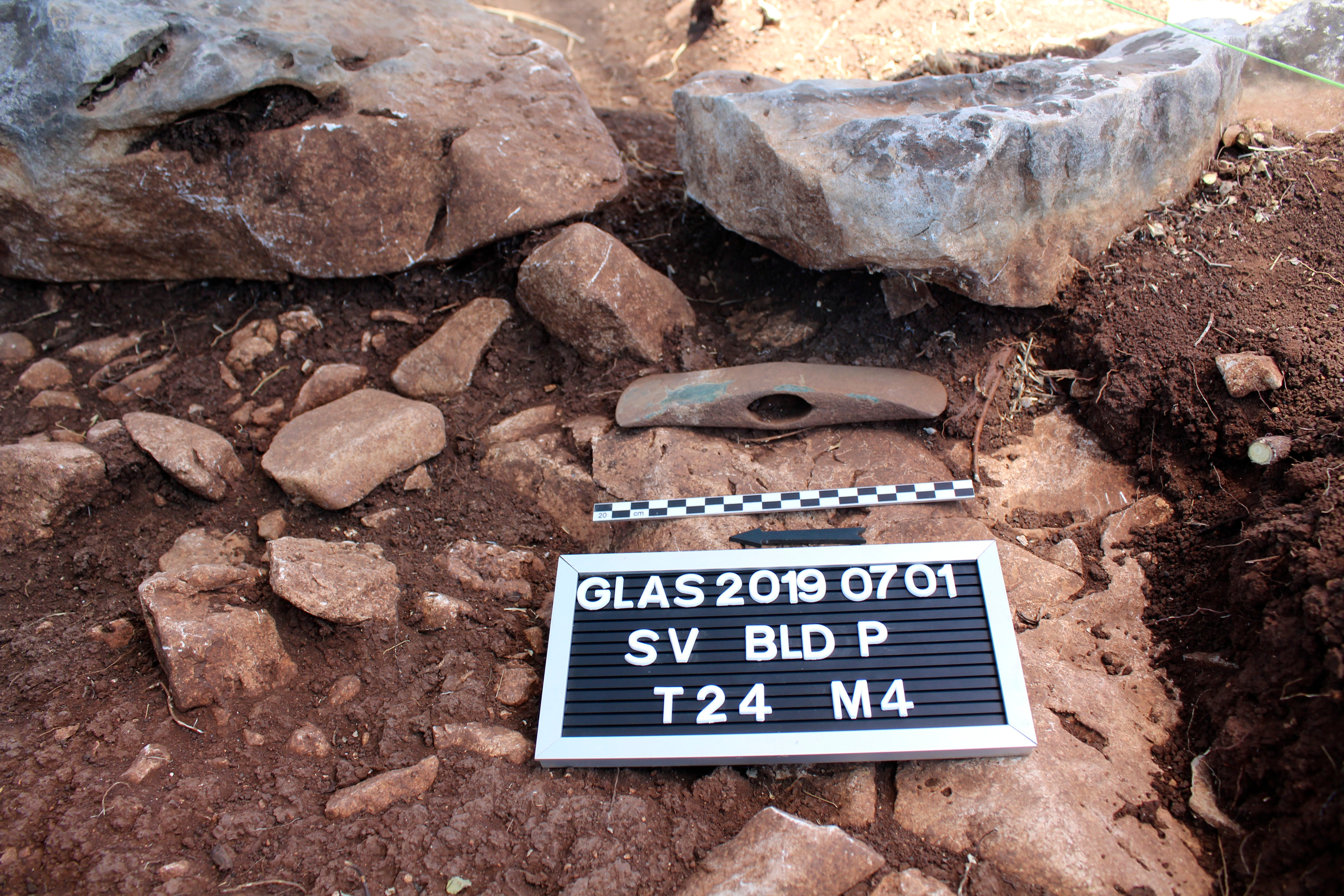 In this undated photo provide by the Greek Culture Ministry on Tuesday, Oct. 5, 2019, a copper double-headed axe found buried in the Mycenaean citadel of Glas in Greece is seen. Archaeologists excavating a vast 3,300-year-old fortress northwest of Athens are hoping to shed light on one of the most impressive engineering feats of ancient Greece. The Culture Ministry says the results of work at Glas, a low, flat hill commanding a sprawling plain, have been “particularly encouraging,” revealing meticulously-planned building complexes. (Greek Culture Ministry via AP)

For most of its history, the surrounding swampy plain was covered by Lake Copais, and was only fully drained in 1931 following a 50-year effort. But over a brief period in the 13th century B.C., local Mycenaean rulers invested in a massive engineering project that changed the course of one river and contained another with huge dikes, creating thousands of acres to grow food and boosting the local economy.

Mysteriously, no more than 70-80 years later, Glas and its waterworks were abandoned, apparently without suffering an enemy attack, and the surrounding fields gradually reverted to wetlands. The hill was never resettled.

“(The inhabitants) took all their belongings and left, and the same happened in two other much smaller fortified settlements nearby,” Kountouri said. “This could be connected with a period of long drought, maybe they couldn’t grow their crops, were left with no food and departed.”

Even the citadel’s name was forgotten. Glas, a name given to it a few centuries ago, is probably linked to an Albanian word for a fortified position.

A series of previous excavations over the past century on the 50-acre acropolis had uncovered scattered buildings, including a large L-shaped structure that could have been the administrative center. The 2018-2022 project undertaken by the Archaeological Society at Athens has established that the citadel’s built-up area was larger than initially thought.

“It didn’t seem very reasonable to build all these fortifications and then just inhabit a small part of the acropolis,” Kountouri said.

Despite its size, Glas wasn’t even an autonomous regional center and was probably controlled by nearby Orchomenos, home to one of Greece’s biggest Mycenaean tombs built for a local ruler.

“It was an unprecedented project … the concept alone is astonishing,” she said. “It shows a very advanced knowledge of architecture and hydraulic engineering.”

She said the strong fortifications and large buildings show Glas was clearly an “extremely important” site.

“I think it was more than just a center where the (reclaimed farmland’s) produce was gathered and administered, but that’s still a question we’re trying to answer through our excavations,” Kountouri said. /kga