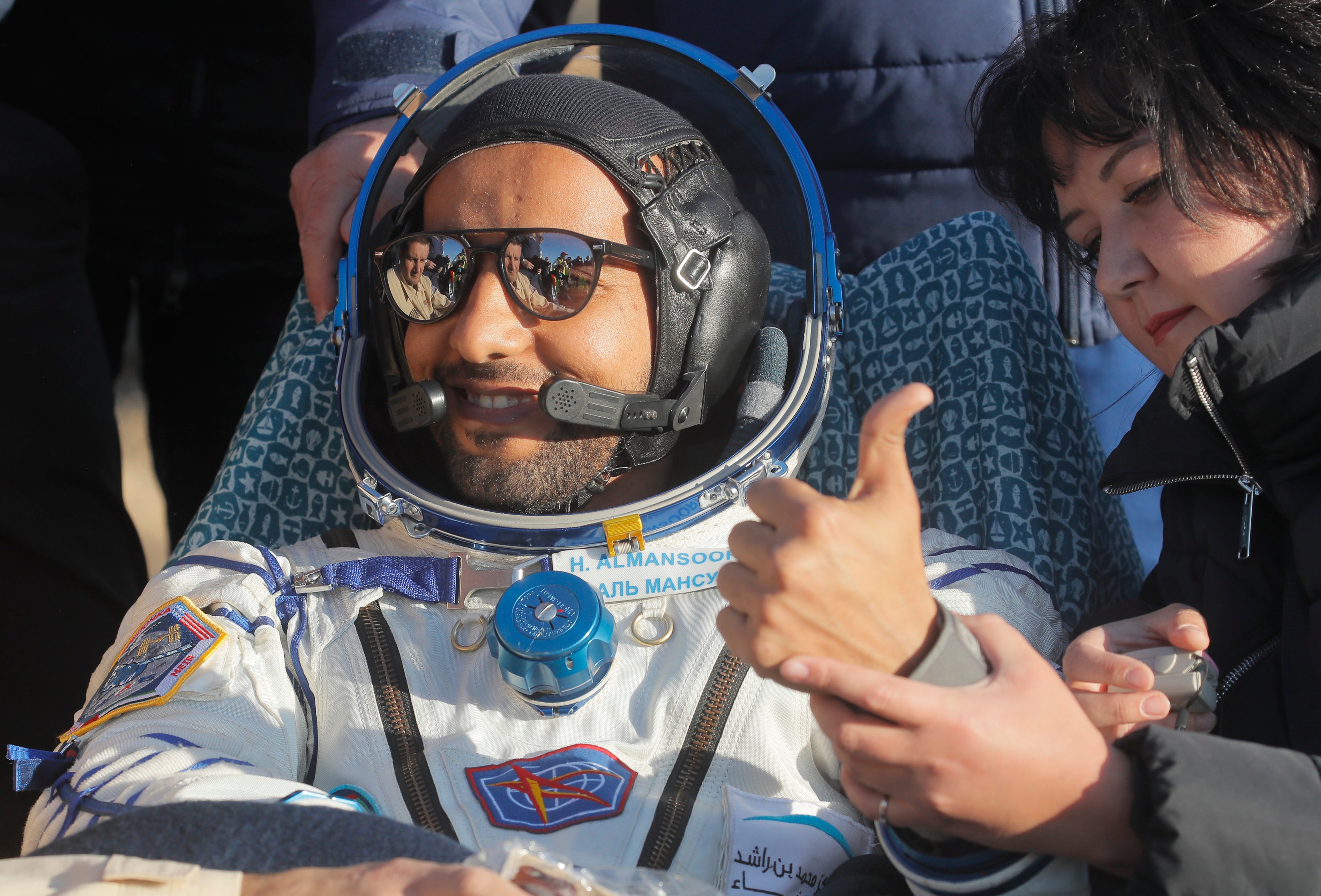 (FILES) In this file photo taken on October 03, 2019 United Arab Emirates astronaut Hazzaa al-Mansoori gestures shortly after the landing of the Russian Soyuz MS-12 space capsule about 150 km (90 miles) south-east of the Kazakh town of Dzhezkazgan on October 3, 2019. – Wearing a blue space suit with a UAE flag on one sleeve and a spaceship on the other, the first Emirati astronaut said on November 12, 2019 his mission highlighted a crucial issue — climate change.(Photo by Dmitri Lovetsky / POOL / AFP)

But first, says the chief of the Emirates Space Agency, there needs to be regulation.

Within a few months the UAE will enact its first space law, he said, designed to attract investment and regulate the activities and services of companies operating in the country.

“It was approved by the government and now is in its final stage of issuing,” the space agency’s director-general Mohammed al-Ahbabi told AFP.

The UAE, whose colossal skyscrapers and mega-projects put it on the world map, hopes otherworldly new industries could be the key to its economic future.

The country already has the most diverse economy in the oil-reliant Gulf, but the once-booming property, tourism, and trade sectors that have made it a regional powerhouse have sagged in recent years.

So now it is looking beyond Earth itself, with typically grand ambitions for a country whose cities rise out of the desert.

Industries of the future

The new law, drafted by the agency, would address future space tourism or mining projects.

“We think it’s going to come to (fruition) within the next 10 years,” Ahbabi said of the sector.

“There is no project today because the technology is not yet there, but we’re looking ahead of time and putting together those regulations.”

“We look forward to working with the UAE Space Agency and other partners in the UAE,” Virgin Galactic CEO George Whitesides said at the time.

The new law will also regulate UAE-developed satellites to make sure they adhere to international space treaties.

“This is a legal document to regulate the space industry… for example registering your satellite and making sure you have the proper licensing,” Abhabi said.

Ahbabi said the UAE has 10 functioning satellites in orbit and plans to launch another eight in the next few years.

The existing satellites, he said, were under the jurisdiction of other government entities, including the telecommunications authority and the finance ministry.

“But now we’re transferring all the data to the space agency,” he said.

The UAE launched its national space strategy earlier this year, setting out a framework for its activities in the sector over the next decade.

In September it celebrated the milestone of sending the first Emirati into space.

Hazza al-Mansouri was part of a three-member crew that blasted off on a Soyuz rocket from the Baikonur space center in Kazakhstan.

He returned home to a hero’s welcome after an eight-day mission in which he became the first Arab to visit the International Space Station, where he took part in scientific experiments including a time-perception study.

In 2020, the UAE aims to become the first Arab country to launch an unmanned probe, named Hope, which will travel to Mars before returning to Earth the following year.

The UAE is also planning to build a “Science City” to replicate conditions on Mars, where it hopes to build a human settlement by 2117.