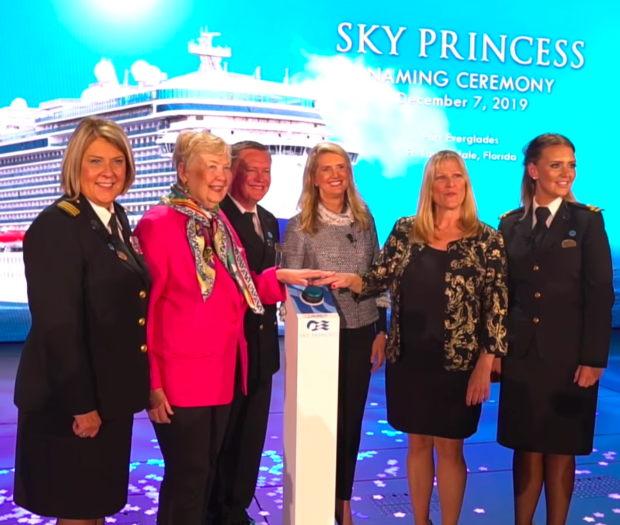 Princess Cruises has named its latest ocean liner the Sky Princess, in tribute to the pioneering women of the U.S. Space Program.

An astronaut and engineer who played pivotal roles at NASA, blazing a trail for women in space, christened the latest cruise ship in a splashy ceremony that included a NASA-style “launch” button and the traditional smashing of a 15-liter bottle of champagne.

Throughout her 30-year career at NASA, Captain Kay Hire logged 700 hours in space, flew more than 12 million miles and orbited the earth 475 times. Hire also holds the title of being the first woman to be assigned to a military combat flight crew while serving in the US Navy.

Poppy Northcutt served as the first female mission control engineer during NASA’s historic moon landing. Northcutt also served on the team that helped bring the crew of the Apollo 13 back to earth safely when they became stranded in their service module.

"I hope that more people put adventure in their life. I've had these wonderful adventures to fly all over the world and to orbit our beautiful earth. And with Sky Princess, guests will have the opportunity to have the adventure of sailing into the open seas, where they have an unobstructed view of the sky and all the wonderful adventures they can have in an exciting port." – Captain Kay Hire, NASA – National Aeronautics and Space Administration Astronaut, U.S. Navy Aviator, and Sky Princess Godmother

“As we celebrate our newest, most technologically advanced ship — one whose spirit of adventure and discovery match the grandeur of her name, Sky Princess, we also applaud the groundbreaking women of the U.S. Space Program,” said Princess Cruises President Jan Swartz in a press release.

“Our godmothers, Captain Kay Hire and Poppy Northcutt, remind us all of what we can achieve when we reach for the sky.”

Features on the Sky Princess include a new digitally immersive escape room called the Phantom Bridge and Take Five — claimed to be the only jazz theater at sea.

The ship has already had a season in Europe and is sailing to the Caribbean through the spring of 2020. NVG