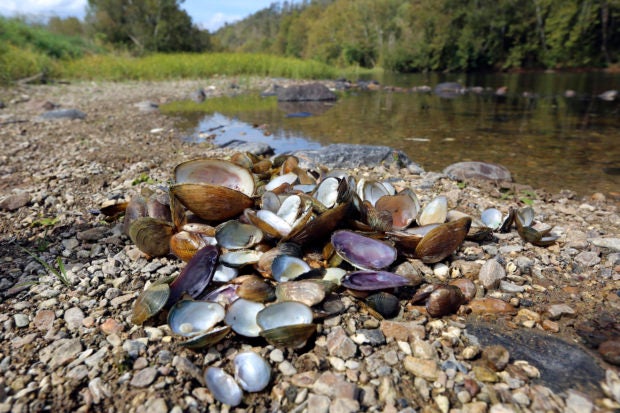 A pile of recently dead freshwater mussels are piled along the shore of the Clinch River near Wallen Bend, Tenn. Image: Meagan Racey/U.S. Fish and Wildlife Service via AP

On a recent late fall afternoon at Kyles Ford, the white branches of sycamore trees overhung the banks of the Clinch River, leaves slowly turning yellow. Green walnuts covered the ground. The shallow water ran fast and cold over the rocky bottom, but it was littered with the white shells of dead mussels.

Freshwater mussels range from about the size of a large button to the size of a billfold, but the work they do for ecosystems is enormous. They can filter around 8 to 10 gallons of river water each day, cleaning it of algae, silt and even heavy metals and making the whole river a better environment for fish, amphibians, plants and bugs. Mussels also benefit the people who use their rivers as a source of drinking water.

That’s why scientists are working quickly to discover the cause of a massive mussel die-off on the Clinch and understand whether it is related to similar die-offs on at least five United States rivers and another in Spain.

The Clinch River, winding 300 miles through Appalachia, is home to 133 species of fish and is one of the most important rivers for freshwater mussels in the world, with 46 different species — more than in all of Europe.

“I always try to get people to call this area a temperate Amazon, because the biodiversity here really is off the charts,” biologist Jordan Richard, with the United States Fish and Wildlife Service, said recently as he stood in waders, surveying the mussel population at Kyles Ford, a rural community of around 525 near the Virginia border.

Richard slogged through thigh-deep water in search of pheasantshell mussels, until recently one of the most abundant species on the river. He spots them easily although to the untrained eye, they aren’t so obvious. Mussels bury themselves in the riverbed, digging in with their single foot and leaving only a crescent of their shells visible. 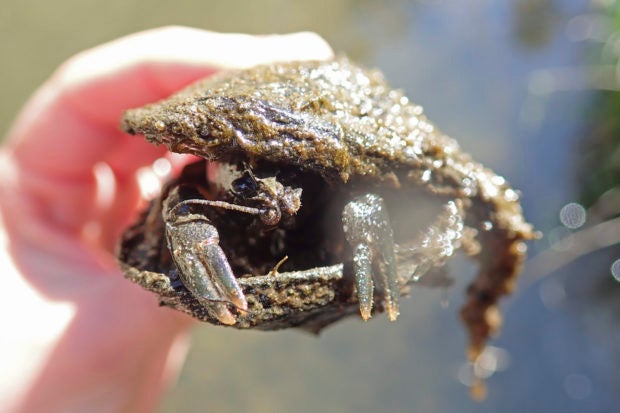 In 2016, Richard noticed the pheasantshells were dying in large numbers — the population dropping from 94,000 in 2016 to less than 14,000 this year on a 200-meter (219-yard) stretch. He estimates hundreds of thousands, possibly millions, have died in the larger river.

Richard found reports of similar die-offs over the years in rivers around the world, but he didn’t find many answers.

Over the past century, mussel populations everywhere have declined steeply due to pollution, habitat loss and climate change, yet the current decline looks to be something different.

Richard and a team of scientists suspect an infectious disease. By comparing healthy pheasantshell mussels with dying ones, the team is narrowing down a list of suspected pathogens.

“All living things are chock-full of microorganisms, and we don’t have any sort of map for what is healthy inside a mussel,” Richard said.

University of Wisconsin epidemiologist Tony Goldberg is helping with the investigation. He specializes in wildlife diseases of unknown cause — and recently he’s been busy.

“Along with invasive species, we’re seeing invasive pathogens,” Goldberg said. “Often it’s the coup de grace for a species that is holding on by a thread.”

Disease is a big part of the global extinction crisis, he said. For example, white nose syndrome was first discovered in a single New York cave in 2007 and has since killed millions of bats, and chytrid fungus is responsible for the demise of tree frogs and about 200 other amphibian species worldwide.

But Goldberg is hopeful the freshwater mussel team, which includes scientists from the U.S. Geological Survey and a nonprofit conservation group, will be able to find the cause of the mussel die-offs and a way to stop them.

“I see it as a race against time, not an impossible task,” Goldberg said. “We’re all motivated by the sinking realization that if we lose these mussels, the rivers we all love are never going to be the same.” 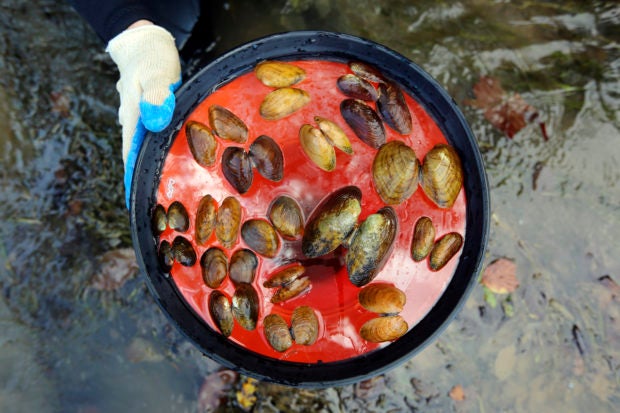 The Clinch, which is relatively pristine on its upper reaches, has seen 10 mussel species go extinct — it used to have 56. Another 20 species there are endangered, including mussels with evocative names such as fluted kidneyshell, snuffbox, birdwing pearlymussel, and shiny pigtoe.

Preliminary results indicate that whatever is killing the pheasantshell mussels on the Clinch is not the culprit in other die-offs under investigation in Wisconsin, Michigan, the Pacific Northwest and Spain.

“There’s not some mussel Ebola sweeping across the world to take out every mussel everywhere,” Goldberg said.

That also means there’s no single cure for what’s killing them.

In Spain, biologist Rafael Araujo is working with Goldberg to figure out what is killing the last of the endangered Spengler’s freshwater mussels in the Imperial Canal on the Ebro River.

“We know that the problem is environmental (dams, water pollution, excess fertilizers, pesticides, exotic species, lack of water, etc.), but we also think that there could be a pathogen (bacteria and/or virus) that is making things worse,” Araujo wrote in an email.

In Oregon and Washington, Emilie Blevins is studying the die-off of western pearlshell mussels in her role as a biologist with the Xeres Society for Invertebrate Conservation.

Blevins likens mussel beds to coral reefs in terms of their diversity and contributions to other aquatic life. But she acknowledges, “They just don’t get the spotlight of some other big, beautiful species. A big part of all of our work is … spotlighting how important they are because if we don’t value them, they’re not going to be around.” CL/JB