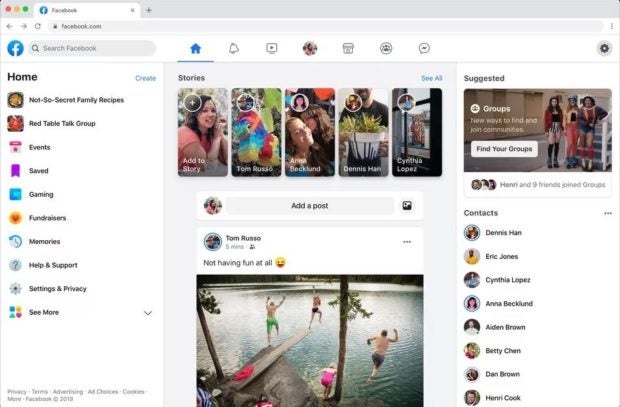 The Facebook platform redesign that the company announced last year has begun to roll out. Image: courtesy of Facebook via AFP Relaxnews

Approximately eight months after Facebook originally announced that the Facebook design which we know and (maybe) love will be but a thing of our memories, the new layout is emerging.

This news of the platform’s upcoming web and mobile design update was revealed during the F8 conference last spring, and now, the change has begun rolling out, according to CNET.

What they then see once logged in is a significantly less blue version of the platform presented in a more organized, icon-based fashion. Stories are moved even further to the top of the page demonstrating the company’s intentions to capitalize on this tool.

This small collection of users can return to the old version of the platform if they prefer.

According to CNET, the media company stated that it intends to roll the update out more broadly before this spring. IB/JB

Despite warnings from experts, Palace insists use of rapid antibody tests