Laptops of the future steal the show at CES 2020 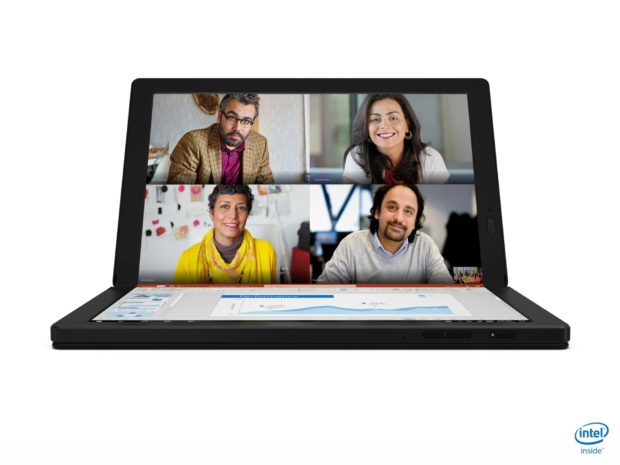 The Lenovo ThinkPad X1 Fold will be the first laptop with a foldable screen to go on sale in stores. Image: courtesy of Lenovo via AFP Relaxnews

Laptops have been the center of attention at the 2020 Consumer Electronics Show (CES), which wraps up  Friday, Jan. 10 in Las Vegas, with the notable presentation of 5G-compatible machines and models equipped with groundbreaking folding screens.

CES 2020 has been marked by the arrival of the first-ever laptops to be equipped with folding screens. For the most part, the new machines are still at the prototype stage, like the ones presented by Intel and Dell. Both of these are hybrid PCs, which when fully opened function like tablets, and in a more classic laptop position allow users to access multiple applications or type using a virtual keyboard.

However, one manufacturer has already gone beyond the prototype stage and is ready to take the plunge with a model that is due to launch this year. At this year’s CES in Las Vegas, Chinese manufacturer Lenovo, which is the largest PC vendor in the world, presented the ThinkPad X1 Fold, the first-ever PC to be equipped with a 17-inch diagonal foldable screen.

Fully unfolded, the device resembles a tablet, while in the classic laptop position, it offers two touch screens (of about 12 inches each) that can display several programs or a virtual keyboard. Lenovo is also planning to add a peripheral keyboard for the device, which will be sold separately. The Lenovo ThinkPad X1 Fold is expected to go on sale in the United States this summer for as little as $2,499 (around P126,000).

By the end of the year, Lenovo, probably Dell, and perhaps other manufacturers, will be surfing a new wave of folding-screen PCs. All of the future laptops will be equipped with Windows 10X, a variation of the operating system specially designed for this new category of device.

As a general rule, these first folding-screen models should also be 5G compatible, the other big trend this year. Like the latest smartphones, they will offer an enhanced mobile-user experience with a permanently available high-bandwidth connection while on the move, but will still be able to take advantage of more traditional WiFi services at home or at work.

Once again, Lenovo will be among the first to market with a machine in this category. Christened the Yoga 5G, the new model is equipped with a Qualcomm Snapdragon 8cx chip with an integrated X55 5G modem. This gives the computer a slot for a nano SIM and there is also eSIM support. In addition, the manufacturer has announced a record 24-hour battery life. The Lenovo Yoga 5G is expected to be available in the U.S. from spring 2020 at prices that start from $1,499 (almost P76,000).

Among the other much talked-about machines at the show was the Acer ConceptD 7 Ezel, a revolutionary hybrid laptop which can be rotated into five different configurations thanks to its double hinge. However, no information was provided on its future availability.

Last but not least, yet another spectacular PC, the Asus ROG, which targets gamers, broke new ground as the most powerful 14-inch notebook on the market. It will be available in Q2 2020. IB/JB