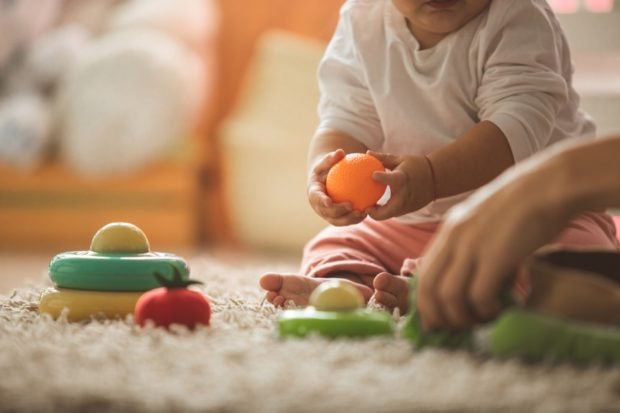 New research has found that when parents and babies play together, their brains are in sync. Image: IStock.com/fotostorm via AFP Relaxnews

New United States research has found that playful interactions between a baby and adult spark similar types of measurable brain activity in each individual.

Carried out by researchers at Princeton, the new study included 18 children age 9 months to 15 months who took part in two experiments in Princeton Baby Lab.

In the first experiment, an adult researcher played with a child for five minutes, either playing with toys, singing nursery rhymes or reading “Goodnight Moon”, while the child sat on their parent’s lap.

In the second, the researcher turned to the side and told a story to another adult, while the child played with their parent.

To record brain activity during the activities — in a child-friendly way — the researchers developed caps designed to be worn by the adults and babies, which incorporate a new and safe dual-brain neuroimaging system that uses functional near-infrared spectroscopy (fNIRS). fNIRS records oxygenation in the blood to show neural activity. The caps collected data from 57 channels of the brain known to be involved in prediction, language processing and understanding other people’s perspectives.

The findings, published in the journal Psychological Science, showed that during the first experiment when the babies were playing with an adult researcher, the babies’ brains were synchronized with the adult’s brain, and neural activity in both brains rose and fell together.

Moreover, the brain activity occurred in several areas of the brain involved in a high-level understanding of the world. The researchers say this could maybe help babies understand the overall meaning of a story being read to them, or analyze the motives of the adult who was doing the reading.

However, when the researcher turned away from them, this shared brain activity stopped.

The researchers also noted that they were surprised to find that neural activity was most in-sync in the prefrontal cortex, a brain area involved in learning, planning and executive functioning, and which was previously thought to be quite underdeveloped during infancy.

“We were also surprised to find that the infant brain was often ‘leading’ the adult brain by a few seconds, suggesting that babies do not just passively receive input but may guide adults toward the next thing they’re going to focus on: which toy to pick up, which words to say,” said Lew-Williams, who is a co-director of the Princeton Baby Lab.

“Previous research has shown that adults’ brains sync up when they watch movies and listen to stories, but little is known about how this ‘neural synchrony’ develops in the first years of life,” said first author Elise Piazza.

“While communicating, the adult and child seem to form a feedback loop,” Piazza added. “That is, the adult’s brain seemed to predict when the infants would smile, the infants’ brains anticipated when the adult would use more ‘baby talk,’ and both brains tracked joint eye contact and joint attention to toys. So, when a baby and adult play together, their brains influence each other in dynamic ways.” CL/JB