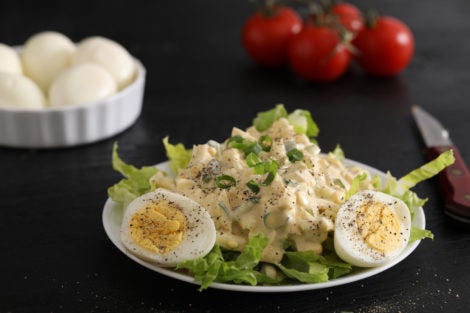 Eating eggs does not increase the risk of cardiovascular disease, according to new research. Image: Istock.com/DebbiSmirnoff via AFP Relaxnews

New United States research has found that despite previous concerns, eating an egg a day is not linked with a higher risk of cardiovascular disease (CVD).

Carried out by researchers at Harvard T.H. Chan School of Public Health and Brigham and Women’s Hospital, the new study looked at data taken from three large cohort studies. One included 83,349 female nurses aged 30 to 55, another 90,214 female nurses aged 25 to 44, and the third 42,055 male health professionals aged 40 to 75. All participants were free of CVD, type 2 diabetes and cancer at the start of the study.

The researchers looked at a possible link between the participants’ egg intake and the rates of CVD, including non-fatal heart attack, fatal coronary heart disease and stroke, over a period of up to 32 years.

The findings, published by The BMJ Thursday, showed that most of the participants ate between one to five eggs per week, and those who ate more eggs also tended to eat more red meat, have a higher body mass index (BMI) and were less likely to be treated with statins, which are commonly used to help lower cholesterol to protect against heart attack and stroke.

In addition, the team also found that after taking into account other possible influencing factors such as age, lifestyle and diet, there was no link between consuming at least one egg per day and a higher risk of CVD, compared to eating less than one egg per month.

To investigate further, the team then carried out an updated meta-analysis of 28 observational studies, which again failed to show a link between eating eggs and CVD risk among participants in the U.S. and European studies. Moreover, the findings showed that moderate egg consumption was associated with a slightly lower CVD risk in Asian populations. The researchers say that this could be due to the fact that eggs are often included in a variety of dishes in Asian cultures, whereas in Western cultures eggs are often eaten with the same unhealthier foods — commonly red and processed meats and refined grains.

Despite eggs being a quick and affordable source of nutrients, including protein, iron and unsaturated fatty acids, some believe that eating too many of them could be a risk factor for CVD, as they are also high in cholesterol.

The researchers point out that as an observational study, they still cannot establish a cause-and-effect relationship between eggs and CVD risk. In addition, the study also found that those who ate more eggs actually tended to be less healthy, in general. However, the findings from both the study and the meta-analysis suggest that moderate egg consumption, which is up to one egg per day, is not associated with cardiovascular disease risk overall.

In a linked editorial, Professor Andrew Odegaard at the University of California says that the results of the study are convincing, but “we should not put all our eggs in this observational basket for formal guidance on eating eggs.

“If frequent egg consumption is occurring in the context of an overall dietary pattern known to be cardioprotective, or eggs are being consumed for essential nutritional needs, then it is probably nothing to worry about,” he says. CL/JB

US researchers use AI to develop powerful new antibiotic