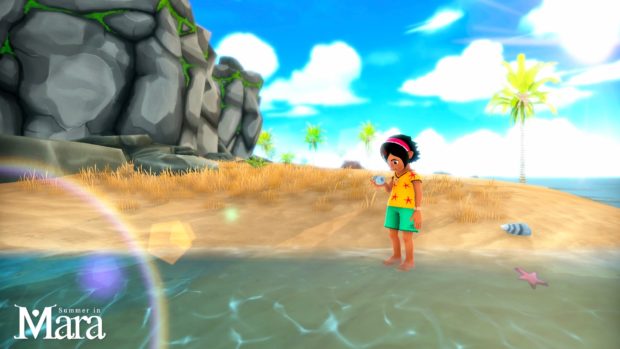 “Summer in Mara” is to launch on Switch before other consoles, with a PC release also anticipated. Image: Chibig Studio via AFP Relaxnews

March’s Indie World Showcase squeezed 21 Nintendo Switch games into a 19-is minute video. Here’s what they are and when they’re due out.

With “Animal Crossing: New Horizons” and “Doom Eternal” releasing March 20 and a sequel to “The Legend of Zelda: Breath of the Wild” suggested, but far from confirmed, for late 2020, Nintendo’s release calendar could be accused of looking a little bare.

In steps March’s Indie World Showcase, a roll call of small-team titles set for release between now and the end of the year.

Another handful are landing in Spring 2020 at some point in March, April or May.

Those include the highly-anticipated “Summer in Mara”, a game about growing up, farming, friendship, crafting, exploration, and ocean-going island discovery, which is now going to launch as a timed console exclusive in Spring 2020.

That means it will also be launching on PlayStation 4, Xbox, and Mac and PC, as expected, but on the console platforms, it will be first on Switch for a predetermined (but unannounced) amount of time.

Releasing in March will be card game and landscaping strategy “Faeria” (previously on PC, Mac and Linux), with furniture hauler “Moving Out” arriving April 28 on Switch as well as PS4, XBO, Mac and PC — there’s a demo available to try right now — while stealthy mouse adventure “Ghost of a Tale” and birdwatching card game “Wingspan” are also Spring launches.

Of the rest, epic-scale space adventure “No Man’s Sky” might not be headed to Switch anytime soon but the same studio is making “The Last Campfire”, a game about compassion, empathy and finding your way home; survival horror “Blair Witch”, perspective puzzle “Superliminal”, action game “Bounty Battle” and distinct audiovisual experience “PixelJunk Eden 2” are also set for Summer, likewise unbound from Switch exclusivity.

Quirky, friendly “I Am Dead”, risk rolling “Dicey Dungeons” and “The Good Life”, a game about the nocturnal secrets of the happiest town in the world, were given a wide 2020 release window. CL/JB