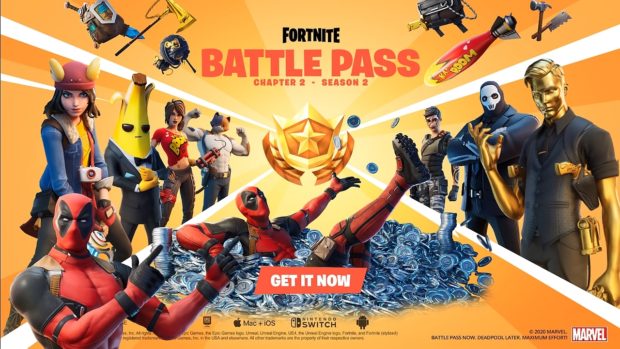 Superhero movie and comic book character Deadpool will be commandeering a place in “Fortnite” after months of waiting from expectant fans and players.

Sarcastic action hero Deadpool has been part of the “Fortnite” background chatter since the game entered Chapter 2 at the beginning of March 2020.

He was teased at the end of the Season 2 trailer, and players soon found a way into his secret restroom HQ from the game’s menu.

Dataminers have also been uncovering files that suggest players—or at least Battle Pass owners—will be able to unlock a Deadpool outfit should they successfully complete certain challenges.

Trust me, you don’t want to miss this. pic.twitter.com/ubrsOFalvf

The message suggests that Deadpool will be commandeering a yacht for the occasion, complete with music and tacos.

It’ll be the second crossover with a 20th Century Studios property in short order, after the March 31 update for “Fortnite” included the bullet-deflecting, sword-fighting umbrellas from the “Kingsman” franchise.

Having acquired “Deadpool” movie distributor 20th Century Fox in March 2019—renaming it to 20th Century Studios in January 2020—Disney is understood to have recommenced work on a third franchise entry, according to December 2019 comments from the series star, co-writer and producer Ryan Reynolds.

Available on PlayStation 4, Xbox One, PC, iOS and Android, free-to-play “Fortnite” derives its revenue from optional payments via an in-game shop that sells cosmetic items as well as a seasonal Battle Pass.

Chapter 2: Season 2 is expected to conclude on April 30, making the introduction of Deadpool an incentive to purchase and push through the Battle Pass even though it’ll expire a few weeks afterward.

Previous “Fortnite” movie crossovers include those for “Avengers: Endgame,” “Ralph Breaks the Internet” and “Star Wars: Rise of Skywalker.” /ra