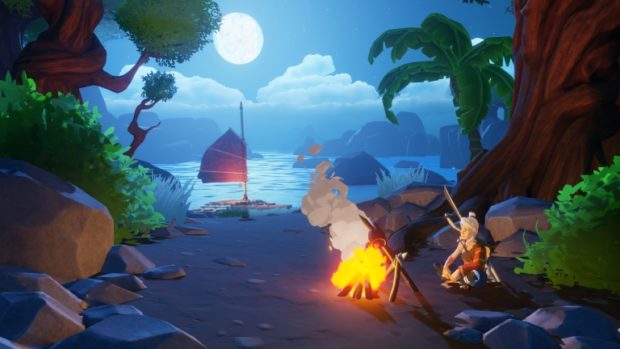 This week, PlayStation has been elevating a number of indie games coming to the PlayStation 4.

Here’s more on four of our picks and the other console or computer platforms they’re expected to land on.

This game looks a little like an evolutionary branch of “Fortnite” that split off, crafted itself a canoe, and went sailing in the direction of survival adventure. Reminiscent of upcoming Xbox exclusive “Everwild” which itself could have been perceived as a response to PlayStation’s “Horizon Zero Dawn”, it’s made by Australia’s 5 Lives Studio (of well-praised strategy “Satellite Reign”) and coming to PS4, Xbox One, Switch and PC in August 2020.

In a future where failed tech startups don’t just fall metaphorically but literally descend underground, it’s up to you, an unpaid intern, to explore these subterranean offices and reclaim their assets for your own shady boss. It’s roguelike, meaning levels will be different every time, and it’s coming from the United States’s Aggro Crab Games to PS4, XBO, Switch and PC (Steam) in September 2020.

Just released on PC after a tickertape tour of video game festivals, this two-player puzzle adventure blends comedy and coordination with a light cranial workout. Developed by Next Studios, a subsidiary of Chinese giant Tencent, it’s accrued a Very Positive 93% user rating on PC gaming platform Steam and releases April 8 on PS4.

A zero gravity multiplayer shooter that aims to open up a range of new possibilities and challenges. Hide behind floating debris, swing confidently with a grappling hook, and spec up with specializations, abilities, and basic capabilities. It’s from China’s Surgical Scalpels studio, supported by Sony PlayStation’s China Hero Project, and due on PS4 and PC sometime in 2020. JB