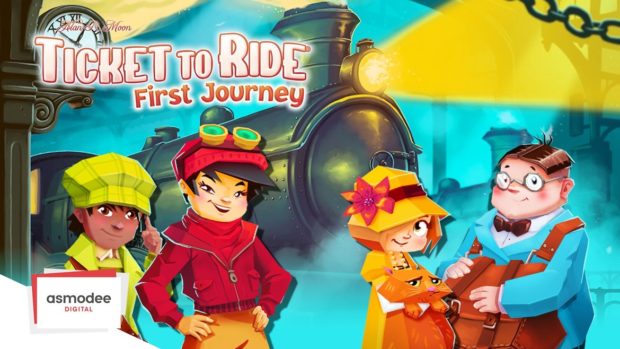 “Ticket to Ride: First Journey,” designed for all the family, retains the challenge of its parent. Image: Asmodee Digital via AFP Relaxnews

Video game companies continue to support home confinement in a number of ways, some with outright gifts, others requiring sign-ups of one sort or another. Among this week’s offers, “Sherlock Holmes: Crimes & Punishments” transports us to 19th-century London, while “Ticket to Ride: First Journey” lays down tracks across North America and European continents.

Detective thriller “Sherlock Holmes: Crimes and Punishments” is this week’s free giveaway from the Epic Games Store, available for Windows PC until April 16.

It’s widely considered to be the best to date from Ukrainian developer Frogwares and has players slinking through the 1890s London solving six interlinked cases, three of which are taken directly from the original stories.

As it’s up to you to interpret the clues you find, right down to facial expressions, it’s entirely possible to draw the wrong conclusion and accuse the wrong person, so tread carefully!

Anyone that wants to lean into the confinement vibe—rather than vicariously escape it—can also check out shipbound, horror-tinged missing persons search “Close to the Sun,” another Epic giveaway.

Back to the subject of badly drawn conclusions, the wonderful social quiz game “Drawful 2” is still free on Steam (PC, Mac, Linux), the Mac App Store and Xbox One until April 11.

It’s ideal for playing with pals over a video call, so snap that one up while it’s still available. The Nintendo Switch version isn’t completely free, but did an impressive limbo dance down to $0.09; standard price is still reasonable $9.99.

Classic board game “Ticket to Ride” is given an all-ages approach through “Ticket to Ride: First Journey,” free for iOS, Android and, from April 9, 5 p.m.  UTC (Coordinated Universal Time) to April 12, 5 p.m. UTC, for Mac and PC through Steam, where the North American map is included and the European map can be unlocked through registration with publisher Asmodee.

As a side note, Asmodee has also posted up a rotation of print-and-play versions for some of its most popular family games at print-and-play.asmodee.fun.

Stadia is supposed to work on supported Android devices and through the Chrome browser on laptops and desktops, bandwidth allowing.

The service had a fairly rocky start and was unfavorably compared to others like Nvidia GeForce Now, Xbox Game Pass (and upcoming Project xCloud) and PlayStation Now.

While Stadia generally asks users to buy games through its store, there are nine titles available on a complimentary basis, including exclusive survival horror homage “Gylt,” the full “Destiny 2” collection, and two from the beloved “Steamworld” franchise.

For some, it might be worth signing up (and considering canceling future payments immediately) just for that. CL /ra