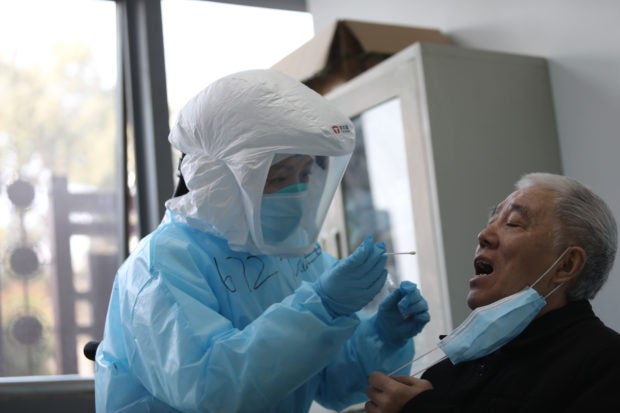 A survey looked at sleep patterns of 1,563 healthcare workers who were on the frontline in the fight against the coronavirus. Image: AFP/STR via AFP Relaxnews

A study conducted at a critical moment of the COVID-19 epidemic in China highlighted frequent cases of insomnia and depression among healthcare workers.

According to official figures, COVID-19 caused more than 3,300 deaths in China, where it first appeared in December 2019. Along with the dramatic loss of life caused by the virus, the epidemic also had a significant impact on mental health, especially among healthcare workers, according to new research published in the journal Frontiers in Psychiatry.

Conducted by researchers at the Southern Medical University in Guangzhou, China, the survey was based on a series of questionnaires submitted to 1,563 healthcare workers who were on the front line in the fight against the new coronavirus. Responses were collected between Jan. 29 and Feb. 3 on the social network WeChat.

More than a third of the participants, 564 people, reported symptoms of insomnia during this period. The authors of the study have noted that this finding is consistent with previous research on the psychological effects of the 2002 SARS outbreak.

Levels of depression were significantly higher among respondents reporting insomnia than they were among other healthcare workers (87.1% as opposed to 31%). In contrast, there was little correlation with percentages for anxiety and trauma related to the epidemic, which were similar among all the participants in the survey.

Constant close contact with infected patients and the fear of contracting the virus and transmitting it to loved ones were the most commonly reported reasons for anxiety.

The authors of the publication also have drawn attention to the stressful working conditions for healthcare workers.

“Medical staff had to wear a full array of personal protective equipment (PPE) for more than 12 hours at a time, often without being able to take a break. … Under these dangerous conditions, they became mentally and physically exhausted, and therefore experienced an increased risk of insomnia due to high stress,” explains lead researcher Chenxi Zhang.

In their conclusions, the research team remarked on the need for long-term studies to track insomnia symptoms to ensure more effective prevention of the disorder among healthcare workers. They also recommended a number of strategies for coping with disturbed sleep, including specialist cognitive-behavioral therapy. CL/JB