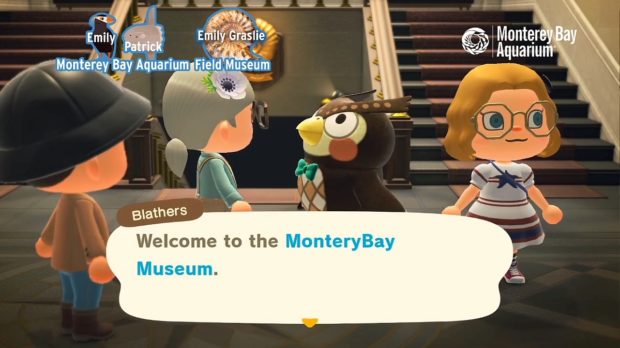 If “Pokémon” is really about math and probability, “Animal Crossing: New Horizons” is a great introduction to natural history.

Players can spend their time looking for fish, insects and fossil remains on behalf of learned owl and museum curator Blathers, whose institution now focuses solely on the natural sciences.

With “Animal Crossing: New Horizons” providing a safe haven during uncertain times, the March debut has been enjoying a heightened profile on social media.

And so, as zoos, museums and aquariums have been turning to social networks, video and live stream to showcase their sanctuaries, Monterey Bay Aquarium on the west coast of the United States has also been wading into “Animal Crossing: New Horizons” via a sequence of Twitch.TV livestreams.

Its most recent, broadcast on April 13, featured guest contributor and fossil specialist Emily Graslie of the Field Museum in Chicago.

Yaaay this was so much fun!! THANK YOU SO MUCH to @Ehmee for joining in and sharing her wealth of knowledge—and thank YOU to everyone who tuna-d in!! You can watch the replay here: https://t.co/byiPlbkkFC

Like the three episodes before it, the show ran to around two hours and featured chat between the hosts and from the live stream audience. CL/JB