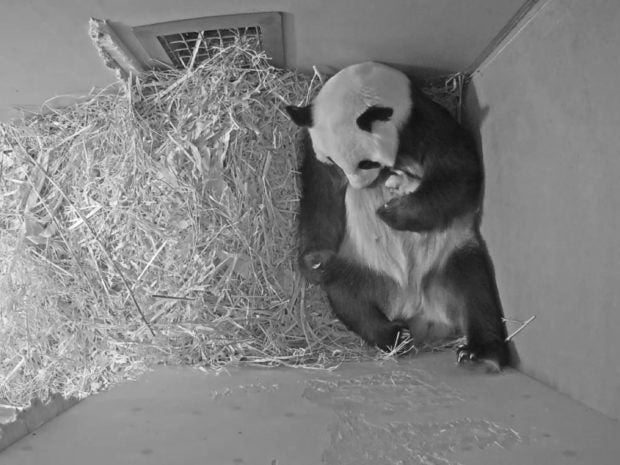 Little shrieks of excitement highlighted the first video appearance by the tiny cub of a giant panda at a Dutch zoo on Tuesday, a sure sign it now stood a solid chance of survival.

The Ouwehands Zoo where the cub was born on May 1 distributed the first pictures and video from the maternity den where mother Wu Wen cuddled, embraced and fed the fast-growing cub. As Wu Wen was carrying the cub around in her mouth, the den was alive with yelps of trepidation.

The release of the visuals also coincided with the end of the critical first days when many cubs die.

“Its well-filled belly is prominent and the distinctive coloring is very finely starting to appear,” the zoo said in a statement.

A giant panda loaned by China to a Dutch zoo as part of a breeding pair has given birth to a cub, the zoo announced Saturday.

The new cub’s gender won’t be known until it leaves the maternity den, likely in a few months’ time, with its mother.

Around 420 pandas live in captivity in zoos and reserves, the majority within China, while an estimated 1,864 live in the wild. RGA