Huawei says ‘survival’ at stake after US chip restrictions

SHENZHEN, China — Huawei on Monday assailed the latest US move to cut it off from semiconductor suppliers as a “pernicious” attack that will put the Chinese technology giant in “survival” mode and sow chaos in the global technology sector. 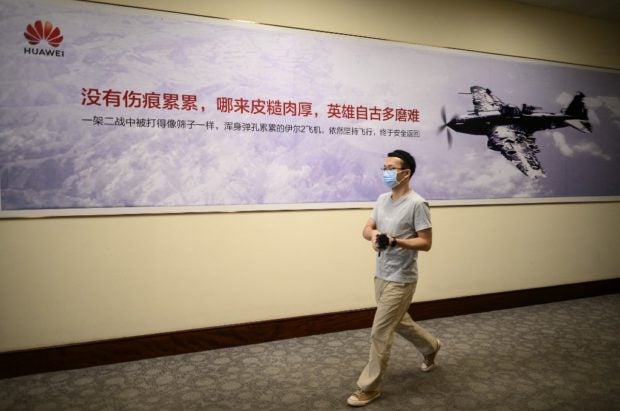 A Huawei employee wearing a face mask walks inside the company’s headquarters in Shenzhen in China’s southern Guangdong province on May 18, 2020. China on May 17 warned it would take “necessary measures” to protect Huawei and other firms after the United States announced new restrictions on the tech giant’s purchases of semiconductor technology. Photo by NOEL CELIS / AFP

The Commerce Department said on Friday it was tightening sanctions on Huawei — seen by Washington as a security risk — to include denying it access to semiconductor designs developed using US software and technology.

“The decision was arbitrary and pernicious and threatens to undermine the entire (technology) industry worldwide,” Huawei said in a statement.

Huawei has largely weathered an escalating 18-month campaign by the Trump administration to isolate it internationally.

But it “will inevitably be affected” by the new American salvo, rotating chairman Guo Ping said at an annual summit of technology analysts that Huawei organises at its headquarters in the southern Chinese city of Shenzhen.

“Survival is the key for us now,” Guo said, issuing an appeal to Huawei’s suppliers and customers worldwide to stand with it.

He declined to give a detailed forecast of the impact when asked by journalists.

But the Huawei statement said the US decision “will have a serious impact on a wide number of global industries” by creating uncertainty in the chip sector and technology supply chains.

US officials said Huawei had been circumventing sanctions by obtaining chips and components that are produced around the world based on American technology.

Washington last year said it would blacklist Huawei from the US market and from buying crucial American components, though it has extended a series of reprieves to allow US businesses that work with Huawei time to adjust.

On Friday it extended this reprieve by another 90 days but said these exceptions are not likely to be extended further.

Commerce Secretary Wilbur Ross had said that even as Huawei seeks to develop its own components in response to US sanctions, “that effort is still dependent on US technologies.”

Huawei strenuously denies the charges, saying the United States has never provided any proof of a security threat.

The sanctions against the company have been a key driver of heightened US-China trade tensions.

China’s Ministry of Commerce on Sunday warned it would take unspecified “necessary measures” to protect Huawei.

US officials said the new rules would have a 120-day grace period.

A senior State Department official said the move would not necessarily deny Huawei access to these products but require a license allowing Washington to keep track of the technology.

US trying to ‘crush’ rivals

Huawei is poised to become a global leader in the coming advent of fifth-generation, or 5G, wireless networks and Washington has lobbied other countries to shun Huawei gear over potential security risks.

China’s government has poured money into developing home-grown semiconductors — the building blocks of tech — but it still lags behind the US, Japan and South Korea, which analysts say is a glaring Achilles heel for Chinese companies like Huawei.

Huawei said the US was “leveraging its own technological strengths to crush” foreign companies.

The resulting disruptions to supply chains will ultimately harm US interests, it added.

Declaring Huawei was “taking the lead” in global tech, Guo suggested that Washington’s pressure was fuelled by fear that the United States was falling behind technologically.

“Any other country or company with more advanced technologies may put US supremacy at risk,” he told the industry conference.