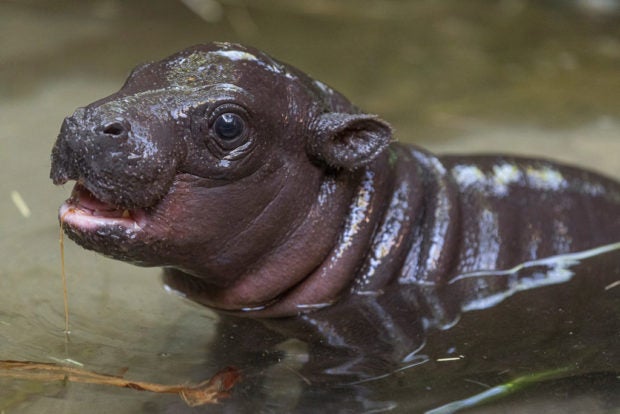 The baby was born to a 4-year-old mother named Mabel, the zoo said in a statement last Friday, May 15, which is also celebrated as the annual Endangered Species Day.

Pygmy hippos are classified as endangered on the International Union for Conservation of Nature Red List of Threatened Species.

Mabel gave birth to the male calf in an indoor habitat for pygmy hippos, in a forest area in the zoo. The baby weighed 12.4 pounds at birth.

“Typically, a pygmy hippo calf is tucked into a safe place before it begins to walk and follow its mother,” the zoo stated. “Wildlife care specialists report that the calf, which has not been named, stood, walked and followed Mabel around within just a few hours of being born.”

The calf is also surpassing milestones that wildlife care specialists look for in a young pygmy hippo, such as the ability to go underwater. 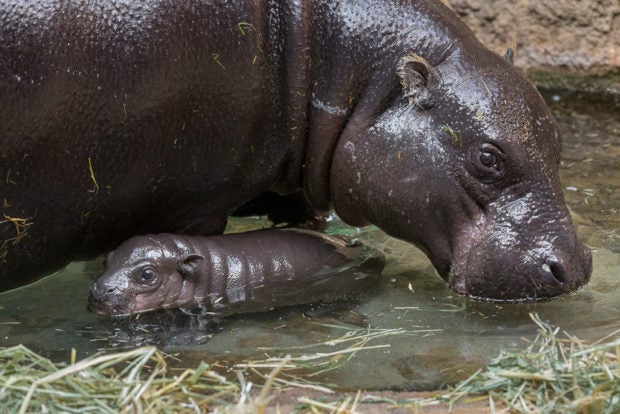 The experts helped the animal prepare for exploration in the water by placing a small, shallow tub in its indoor habitat. They also installed a fence in another outdoor habitat to ensure it would not wander into deep waters when the mother and baby were transferred there.

“The calf demonstrated the natural adaptations and instincts of pygmy hippos—to close their nostrils and to hold their breath [underwater] — and today, both Mabel and the calf have full access to the pool in the maternity yard,” the zoo stated.

Meanwhile, Mabel and her baby, who now weighs 25 pounds, will be given access to the main hippo habitat in about a month.

“When this happens, wildlife care specialists will rotate mom and calf with the 13-year-old male pygmy hippo, Elgon,” the zoo explained. “The calf will not be introduced to his father because pygmy hippos do not live in family groups, and males do not play a role in the rearing of offspring.”

The staff also noted that Mabel and her calf “are doing very well” and he is getting “lots of attention from the first-time mother.”

Less than 2,500 pygmy hippos still live in Africa, where they usually reside in rivers and streams located in forests in Liberia, Côte d’Ivoire, Guinea and Sierra Leone. The zoo noted that “the primary threats to this species’ population are logging, farming and human settlement” in their habitats. JB

TOPICS: endangered species, hippopotamus, International Union for Conservation of Nature, United States, zoos
Read Next
Gardening at home could boost well-being as much as biking, walking or dining out
EDITORS' PICK
As campaign heats up, Trump woos Latino, Black voters
SMC applying sustainable measures vs geohazards in Bulacan airport site — Ramong Ang
Water remains our saving grace right now
Pacquiao camp says McGregor fight being considered
The power of two: Renewable energy and natural gas are the cleaner, better combination
KZ Tandingan taking it one step at a time
MOST READ
DepEd disowns self-learning module using ‘dirty names’
Has Duterte done any good? Robredo says yes, but he missed out on many things
Pacquiao to fight McGregor ‘next year in Middle East’
Even without corruption, Manila Bay rehab is not OK during pandemic – Robredo
Don't miss out on the latest news and information.