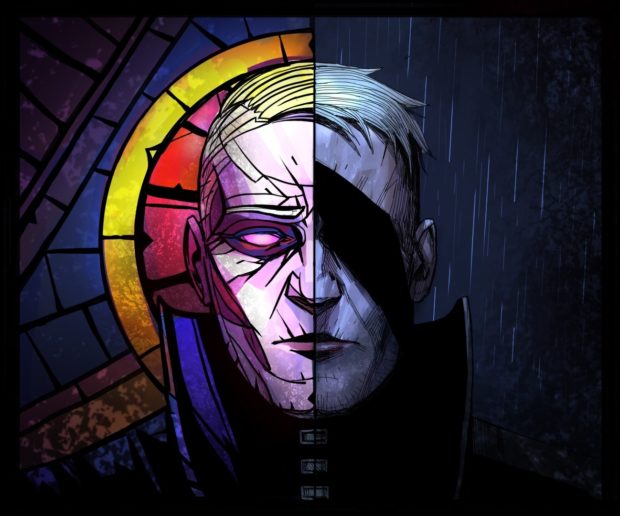 As July Netflix hit “Warrior Nun” traces the history of a modern-day orphan back to divine intervention many centuries ago, the gothic-contemporary, noirish Windows PC adventure “The Blind Prophet” follows an undying 2000-year-old apostle on his journey to defend imperfect and corruptible humanity against demonic agents.

It’s rather more maturely-themed than Netflix counterpart “Warrior Nun”, but “The Blind Prophet” shares a good deal of overlap, not least thanks to an abundance of religious imagery and deep graphic novel associations.

Though “The Blind Prophet” isn’t based on a comic book as “Warrior Nun” was, it’s rendered using very similar visual motifs.

We caught up with its game designer and art director, Baptiste Miny, prior to release earlier this year to talk about the project, its engaging architectural flavor, and the perspective of a cynical immortal hero who must defend humankind whatever the cost.

As a 2000-year-old demon hunter and a mystery-solving apostle, Bartholomeus finds himself wandering the streets of Rotburk.

The city is an amalgam of architectural styles that, once placed in such unusually close proximity, feel both novel and familiar.

In doing so, Miny intended “to catch the feeling of walking through any old European city, with its heritage old town, along with the growing modernity around it”.

Hence the influences of Paris’ grand Haussmannian terraces and Art Nouveau street furniture, as well as the traditional timber-framed construction of Alsace in the east of France and its border country Germany.

Similar to the continent’s historical cosmopolis, Rotburk is rooted in the past but not stuck there: a private 17th-century mansion becomes foundation for the glass and metal skyscraper towering above, topped by a golden pyramid; links between ancient and modern are core to the story’s thematic drive, as with Netflix’s Spain-set fantasy drama.

Where “Warrior Nun”‘s unlikely heroine found herself transformed by contact with a supernatural relic and faced with a choice between freedom and destiny, Bartholomeus had to sacrifice his life to save humanity.

“Our kind is always imperfect and often corruptible, but Bartholomeus must nevertheless find the reason to defend us whatever the cost,” Miny explained.

“He might be jaded and cynical, but he also has faith for a better future and a slow spiritual elevation of the human race,” Miny said. “To nourish his faith, he has no choice but to be attentive to the positive and touching things that sometimes happen around him.”

“Instead of the classic duality of good and evil, ‘The Blind Prophet’ is a reflection on what is really worth fighting for, despite the abundance of reason to abandon.”