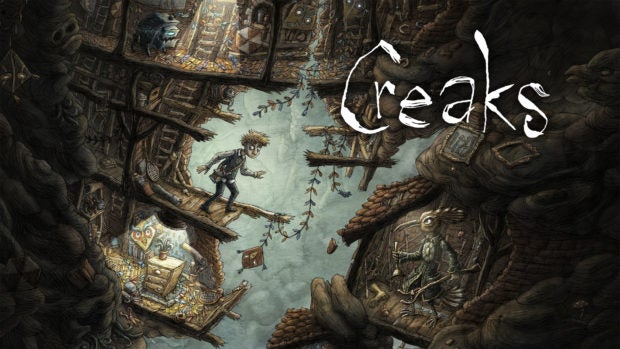 Mobile, console and computer game “Creaks” is the latest from the whimsical and talented Amanita Design, previously lauded for its “Botanicula”, “Samorost” and “Machinarium” games.

The walls and floors of an old mansion give way to reveal a hidden world inhabited by bird people in “Creaks”, the latest adventure from award-winning outfit Amanita Design.

The renowned Czech studio is a regular recipient of accolades from the prestigious Independent Games Festival (and others) thanks to its otherworldly “Samorost” trilogy, sweet veg-tacular journey “Botanicula”, and, most recently, the joyous and mischievous “Chuchel”.

Previously, Amanita has imbued its protagonists with relatable characteristics, while refraining from making them human in nature.

That’s changed with “Creaks”, whose lead is encouraged to investigate the secrets of an old house after hearing strange noises from behind one of its walls.

There is still, of course, a cornucopia of strange creatures to encounter in this unusual underground world.

A lack of direct sun seems to have made some of its inhabitants rather sensitive to light, a quality that can be used to progress from room to room, where there are various mechanisms to tinker with, guards to dodge and, its trailer suggests, friends to make on this curious journey.

Initial reviews have been extremely appreciative, with a 100% recommendation rating, an 84/100 top critic rating, and an overall designation of Mighty from aggregation service OpenCritic; Metacritic’s 81/100 average for the PC version corresponds to 80% positive feedback from Steam players’ user reviews.

Released on July 22, it’s available as a download for PlayStation 4, Nintendo Switch, Xbox One, Windows PC and Mac (via Steam, GOG, and Itch), as well as through Apple Arcade’s curated subscription. IB