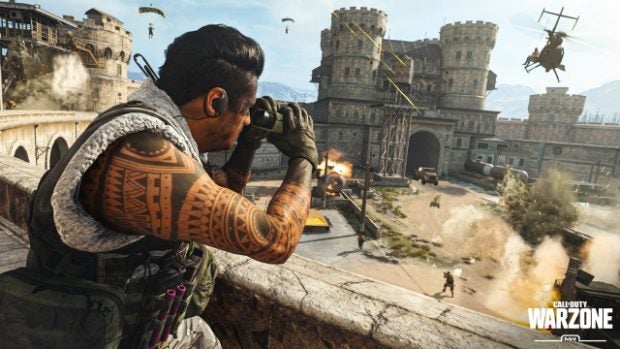 “Call of Duty: Black Ops Cold War” is expected to overlap with “Call of Duty: Warzone” (pictured), just as “Modern Warfare” did. Image: Courtesy of Activision via AFP Relaxnews

Video game giant Activision and snackfood company PepsiCo seem to be continuing their partnership into the fall season of 2020.

Promotional packaging for a Doritos product appears to display a logo for “Call of Duty: Black Ops Cold War”, encouraging customers to enter codes from special bags into the “Call of Duty” website in order to increase game progression for a limited period of time.

These are the two Doritos Double XP promotional images that I was DM'd earlier from an anonymous source for Call of Duty 2020 Black Ops Cold War. I was too worried about copyright issues to post them earlier but since CharlieIntel shared them I (assume?) they're safe. pic.twitter.com/yvvjH7CvKU

Independent franchise news sites ModernWarzone was the first to go live with the images.

“Call of Duty: Black Ops Cold War” had been suggested as the new game’s title in May. Mid-June datamining of a studio test build codenamed The Red Door indicated game locations would include Germany, Vietnam, Nicaragua, Russia and the United States (via Prototype Warehouse).

For comparison, a similar Activision and PepsiCo campaign for 2019’s “Call of Duty: Modern Warfare” began on Oct. 6, with the console and computer game then released on Oct. 25.

However, previous trends have already been ignored as far as “Call of Duty” reveal announcements go. Activision has tended to announce new entries to the franchise in April or May, but this year put its focus on free-to-play console and computer entry point “Call of Duty: Warzone” instead, which launched in March.

After that, Season Pass perks for 2019’s “Call of Duty: Modern Warfare” were shared with “Warzone”, and vice versa, with some story overlap between the two as well. RGA