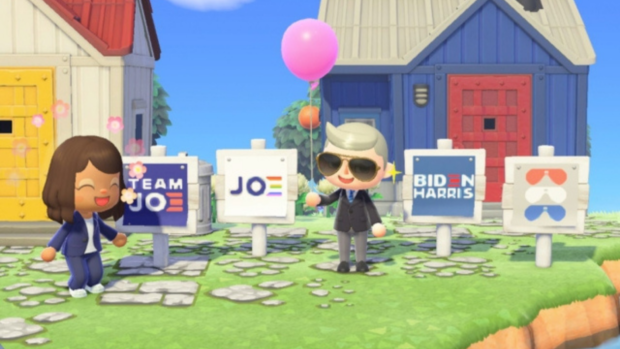 Pro-Biden yard signs have been available for download since Sept. 1. Image: Courtesy of Nintendo via AFP Relaxnews

The United States presidential election has branched out into the world of video games. On Tuesday, Sept. 1, Joe Biden’s team took their first steps in the world of “Animal Crossing”, where yard signs can now be downloaded by his supporters.

Players can proudly show their support for the Democratic candidate by planting the signs in front of their virtual homes, a practice that is also common in real-world America. Gamers can choose between four different sign designs, featuring the official “Biden-Harris” logo, “Team Joe,” “Joe” Pride and an image of three pairs of aviator sunglasses in red, white and blue. Users of the game can download the signs by scanning QR codes in the game’s online app.

The initiative by the Democratic campaign team has been hailed as a clever way to garner votes online by trading on the success of the Nintendo video game. Since the outbreak of the pandemic, sales of “Animal Crossing” have soared creating an exciting new territory in which to communicate political messages.

“‘Animal Crossing’ is a dynamic, diverse, and powerful platform that brings communities together from across the world. It is an exciting new opportunity for our campaign to engage and connect Biden-Harris supporters as they build and decorate their islands,” explains Christian Tom, director of digital partnerships for the Biden campaign. “As we enter the final campaign stretch towards November, this is one way we are finding new creative and innovative ways to meet voters where they are and bring our supporters together.”

This is not Biden campaign team’s first foray into digital communications. The entire Democratic Convention took the form of a streamed online event at the end of August. The virtual space created by “Animal Crossing” has also been used as a venue for protests by the Black Lives Matter movement. RGA