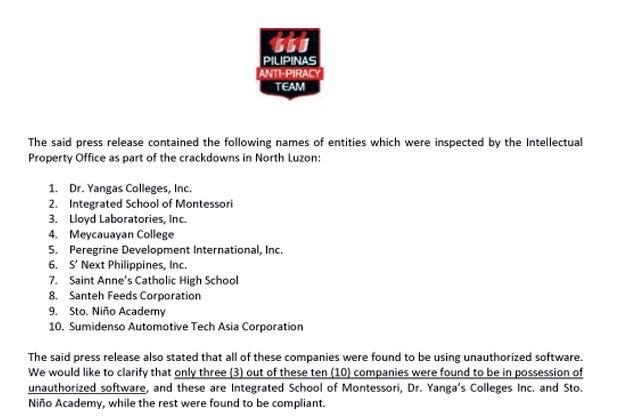 MANILA, Philippines – Only three out of 10 Northern Luzon establishments were found to have been allegedly using pirated software in a raid conducted in late 2013 by elements of the Pilipinas Anti-Piracy Team (PAPT), a spokesperson for one of the organizations that participated in the campaign said.

Lawyer Leo Limbo, enforcement officer of the Intellectual Property Office of the Philippines, issued this clarification to INQUIRER.net Friday after five of the 10 companies named in the PAPT report have denied using illegal software.

There could have been a “misinformation” in the report released in December, which came out on this website in early January 2014.

A similar statement was issued by the PAPT secretariat Saturday, apologizing for “overlooking the error.”

“We would like to clarify that only three out of these 10 companies were found to be in possession of unauthorized software and these are Integrated School of Montessori, Dr. Yanga’s Colleges Inc., and Sto. Nino Academy, while the rest were found to be compliant,” the PAPT said in its Feb. 8 statement emailed to INQUIRER.net on the same day.

“In this light, the PAPT would like to apologize for overlooking this error in the press release and for any inconvenience that this may have caused the companies which were compliant.”

The PAPT report initially drew denials from Lloyd Laboratories, Inc.; Meycauayan College; Peregrine Development International, Inc.; Santeh Feeds Corporation; and Sumidenso Automotive Tech Asia Corporation, prompting them to present INQUIRER.net with documents certifying that they have been “compliant” with the law. Their responses to the PAPT report were likewise posted on this website.

Two others – S’ Next Philippines, Inc. and Saint Anne’s Catholic High School – did not issue statements.

In the interview with Limbo, the IPOPHIL representative did not discount the possibility that there could have been “misinformation” on the part of PAPT.

“Maybe there was a misinformation on PAPT. Maybe these 10 corporations submitted some data or licenses and they are being evaluated,” Limbo said.

“Because the submitted documents of these establishments are being evaluated, so they (PAPT) thought they (the other companies) had an outright non-compliance and ‎violation too,” he added.

When asked about the PAPT claim in its report that “21 sacks of assorted pirated CDs, including various versions of Microsoft Windows operating systems, Microsoft Office, Xbox games, and assorted software installers were discovered during the crackdown”, Limbo clarified that there were no confiscations.

“We did not confiscate anything (from these companies). They just provided us their hardware and software licenses,” he said.

Limbo said that based on IPOPHIL’s evaluation, there were discrepancies on the licenses they (Integrated School of Montessori, Dr. Yanga’s Colleges Inc., and Sto. Nino Academy) presented during the inspection‎,” he said.

He stressed, however, that all the companies that were inspected were “not selling pirated CDs of softwares and games‎”.

PAPT is a collaborative campaign enforced by the National Bureau of Investigation, Optical Media Board, Philippine National Police and the IPOPHIL.

The statement was posted on this website on‎ Jan. 4 in an article titled “10 businesses found using unauthorized software in anti-piracy campaign.”