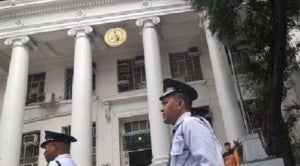 MANILA, Philippines—The Department of Justice’s Cybercrime Office does not see the need to have a law against internet libel.

Justice Assistant Secretary Geronimo Sy, head of the DOJ’s Cybercrime Office, said Cybercrime Law should deal with the core of cybercrime, which is hacking, phishing, child pornography and ATM fraud among others.

He said the provision on Internet libel was a mere insertion by the people from Congress.

“[Libel] is not what we need in a Cybercrime legal law enforcement issue…,” Sy said. With the online libel, complaint could pile up because gossips even lovers quarrel, family arguments are posted on social media.

“If there are 100 complaints, 99 of which is Internet libel and one is on child pornography, that one case is the more important. Taxpayers money will go to waste if we will focus on the 99 complaints for internet libel,” Sy said.

Sy said by March or April, they will submit an amendment to the Cybercrime Law without the provision on internet libel.

He said the country already has a provision against libel in the Revised Penal Code.

“Libel in the Cybercrime Prevention Act is the same libel we have in the Revised Penal Code only the mode of commission is different,” Sy said.

The head of the DOJ’s Cybercrime Office said they fought hard to take out the provision on Internet libel in 2012.

“We fought it all the way from the House, Senate, Bicam…Our legal position on online libel is it is not a priority in terms of criminal law enforcement mas maraming malalalang problema,” Sy said.