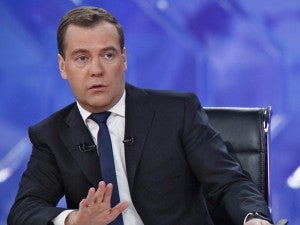 “I’ve wanted to say this for a long time: Vova you’re wrong!” said another tweet, using the nickname for Vladimir.

Medvedev, even when he served as president, was considered the second fiddle to Putin.

Medvedev’s “Twitter account has been hacked, the messages are not genuine. We’re working on the problem,” a government spokesman told the state-tun RIA Novosti news agency.

However, hacked messages continued to appear, and his account quickly became the top trender in Moscow, with the number of followers of his account swiftly rising by 10,000 to over 2.5 million.

Many of the hacked tweets criticized Russian government policies.

“Crimea isn’t ours. Please retweet,” said a message as Medvedev, Putin and lawmakers were set to meet Thursday to discuss problems on the Black Sea peninsula since Russia annexed it from Ukraine in March.

“We could return to the 1980s. That is sad. If that is the objective of my colleagues in the Kremlin, they’ll achieve that quickly,” said another.

Some fear that prohibition of food imports from the EU nations and the United States in response to Western sanctions over Ukraine could cause long food lines reminiscent of those the Soviet Union experienced in the 1980s.

Another criticized a regulation Medvedev signed into force which will require users to register, including providing their passport information, to use public Wi-Fi sites.

“Despite our initiative certain network hooligans don’t give a damn about network access by passport,” said another tweet, followed by a Russian version of a smiley face.