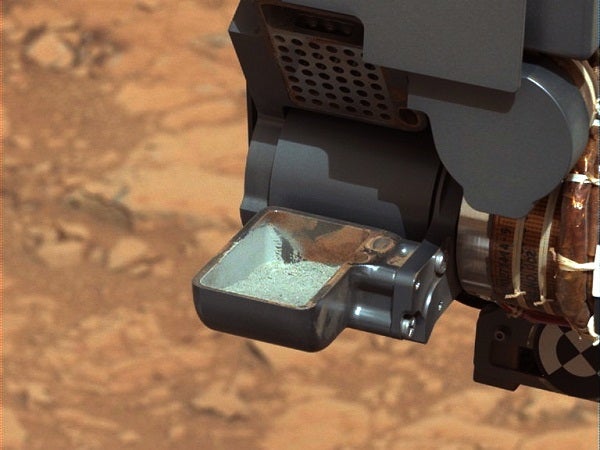 This undated image provided by NASA shows powdered rock in the scoop of the Mars rover Curiosity. The six-wheel rover collected the sample after drilling into a Martian rock. The next step is to transfer a portion to its onboard laboratories for analysis. Curiosity landed in August 2012 to study whether the environment was hospitable for microbes. AP/NASA

MIAMI, United States – Methane, a gas that on Earth comes mainly from living organisms, has been measured for the first time making a sudden spike on Mars, leaving scientists puzzled about its origin.

The latest findings from NASA’s Curiosity rover, which has been exploring the Red Planet since it landed in 2012, were published in the US journal Science on Tuesday and raise the question, could microbes be the source of the methane? And what caused the levels to soar and dissipate again in a matter of weeks?

While the discovery of life on Mars would be a major breakthrough, NASA’s John Grotzinger cautioned that the findings do not mean that scientists have found evidence of life on Mars, and more investigation is needed.

However, he told reporters at the American Geophysical Union conference in San Francisco that the discovery was “really exciting news” because “it is the kind of material that you would look for if life ever originated on Mars.”

“We now have full confidence that there is methane occasionally present in the atmosphere of Mars,” said Grotzinger, NASA Curiosity project scientist at the California Institute of Technology.

“And that there are organics preserved in ancient rocks on Mars in certain places.”

The methane and the organic molecules from a rock-powder sample collected by rover’s drill “can both be consistent with the former presence of life or the existing presence of life,” Grotzinger said.

Mars is widely believed to have once been warm and wet, and potentially welcoming to some form of life in the distant past.

Curiosity is not equipped to find out whether life currently exists on Mars, but the mission aims to uncover whether life ever arose there by looking for chemical elements that are the building blocks of life, including carbon, hydrogen, nitrogen, oxygen, phosphorus, and sulfur.

After poring over 20 months of data collected by the robotic vehicle, scientists found that methane on the dusty planet is far lower than expected, about half of what they thought they would detect from processes like the solar breakdown of dust and organic materials delivered to the Martian surface by meteorites.

However, they also discovered a ten-fold spike in methane in November, by using a tunable laser spectrometer, one of the scientific instruments on the rover.

These sniffs of methane from the Sample Analysis at Mars (SAM) laboratory were taken about a dozen times over a 20-month period. Beginning in late November 2013, the measurements rose, averaging seven parts per billion, or about 10 times higher than the methane detected in prior months.

“Six weeks later we looked again and it had completely disappeared.”

One theory is that methane is “occasionally produced or vented near the Gale Crater — and that the gas disperses quickly once these episodes of venting or production cease,” said the report in the journal Science.

Methane can be generated by solar ultraviolet radiation of cosmic dust on the surface of Mars, said Sushil Atreya, NASA Curiosity science team co-investigator from the University of Michigan, Ann Arbor.

Or, if there is water in subsurface aquifers on Mars, the interaction of rocks and water could produce methane, he said.

Another possibility is that microbes are producing methane in their metabolic process.

Still, scientists cannot tell if the source of methane was “modern” or came from a leakage in stored methane, he said.

What they do know is the source is “relatively well-localized and small,” and is likely north of the rover’s current location in Gale Crater.

“We are really not in a position to say what the origin is,” Atreya told reporters, saying a stronger signal is needed to do that.

“What this is telling us is that Mars is currently active, that the surface or the subsurface is communicating with the atmosphere.”

Humans may only survive 68 days on Mars—study