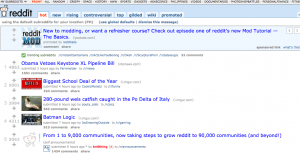 NEW YORK, United States — Social-networking and news site Reddit says it will remove photos, videos and links with explicit content if the person in the image hasn’t given permission for it to be posted.

The move marks a shift for the online venue, which has had a hands-off approach to privacy, largely allowing its 160 million users to police their own forums within certain guidelines such as no child pornography or spam. The change comes about six months after hackers obtained nude photos of Jennifer Lawrence and other celebrities and posted them to social media sites including Twitter and Reddit.

A posting on the site, signed by Reddit executives including CEO Ellen Pao, said the shift is an effort to “help grow reddit for the next 10 years and beyond.” Effective March 10, any photograph, video or digital image of a person who is nude or engaged in a sexual act is prohibited if the subject hasn’t given permission for it to be used. Anyone who wants an image of themselves removed from the site can email [email protected].

Reddit was acquired by Conde Nast’s Wired Digital in 2006 and was spun off as an independent company in 2012.