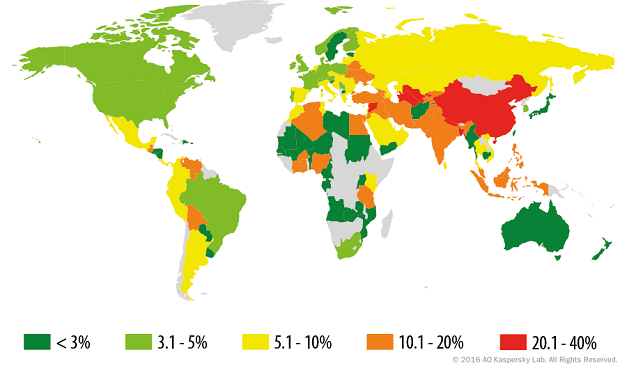 A heat map of mobile malware attacks worldwide, with most countries in Asia under serious threat. Data from Kaspersky Lab

The Philippines is now the 7th most attacked country worldwide when it comes to mobile malware, according to a report by international software security firm Kaspersky.

Kaspersky Lab disclosed data from the Kaspersky Security Network (KSN) which revealed that 15.7% or two in every 10 Kaspersky anti-virus users in the Philippines have been attacked by malware for mobile devices in the first quarter of 2016.

With almost 119 million mobile phone subscribers in the country, the volume of recorded threats has grown from last year’s 5.1% to 10% or one in ten users.

“The main goal of cybercriminals is to earn and with millions of active smartphone users in the country, the Philippines is like an overflowing pot of gold,” said Anthony Chua, Territory Channel Manager for the Philippines and Singapore at Kaspersky Lab Southeast Asia.

The report also revealed that China still has the highest number of detected mobile malware attacks, with roughly 20.1% to 40% or four in ten users under threat of such attacks.

The report also detailed that the KSN detected 2,045,323 malicious installation programs in the first quarter of 2016 and that the number of new mobile ransomware increased in the last quarter of 2015, from 1,984 to 2,895.

Kaspersky Lab also revealed that adware is the leading mobile malware with 42.7% in the first quarter of the year, a 13% increase from last year’s records.

Adware is a form of software that displays advertisements and collects information about the user which comes attached to free programs and applications downloaded online.

“It is high time for Filipino mobile users to think about security. Protect your mobile devices not because of dread for the cybercriminals’ stealthy attacks. Do it for yourself, to secure your data, your privacy and your money,” added Chua.

The full list of cyber threats for the 1st quarter of 2016 is available at Securelist.com. Kurt Lozano, INQUIRER.net trainee/RAM/rga

Malicious software in smartphones rose 300% in 2015

3 cybersecurity threats to watch out for in 2016