Scientists search for extinct Tasmanian tiger after sightings in Australia 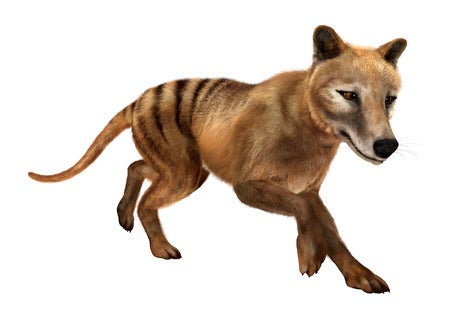 A 3D illustration of the extinct Tasmanian tiger. File photo

A series of reported sightings of the extinct Tasmanian tiger has sparked a nationwide hunt in Northern Australia.

The majestic wolf-life predators, which were recorded extinct after the last one died in a zoo in 1936, are believed to be roaming Tasmania once more, The Telegraph reported.

After gathering data from multiple eye witnesses, zoologists and park rangers have scattered 50 camera traps across the Cape York Peninsula in Australia, in hopes of documenting a surviving population of the creature.

“All observations of putative thylacines to date have been at night, and in one case, four animals were observed at close range, about 20 feet away, with a spotlight,” Professor Bill Laurance, one of the scientists leading the hunt, said in the report.

“We have cross-checked the descriptions we received of eye shine colour, body size and shape, animal behavior, and other attributes, and these are inconsistent with known attributes of other large-bodied species in north Queensland such as dingoes, wild dogs or feral pigs,” he added.

Sightings of the famed marsupial carnivores—also known as thylacine—has been reported by locals and tourists in Australia in recent years, but no one has provided a clear evidence of its existence.

Perhaps the most prominent sighting came from Brian Hobbs, a former tourism operator who said he first saw the animals in 1983 after they startled his pet German Shepherd.

“They were dog-shaped—I had a shepherd with me so I certainly know what dogs are about—and in the spotlight I could see they were tan in color and they had stripes on their sides,” he described the animals.

Despite multiple sightings from different witnesses, Professor Laurance and his team remain cautious, since most reports were written off as cases of mistaken identity. He added that most feral cats and dogs are the creatures’ most common lookalikes.

To aid the hunt, Tasmanian tour operator Stuart Malcolm also offered a substantial bounty of £1 million (over P62 million) to anyone who can prove the thylacine has survived to the present day. Khristian Ibarrola/JB

TOPICS: Australia, extinct creature, sightings, Tasmania, tasmanian tiger, Thylacine
Read Next
New cloud category looks like something from science fiction
EDITORS' PICK
Ahead of ONE: Full Blast II, Mongkolpetch warns Elias Mahmoudi: ‘Watch out for my fists’
Liza Soberano’s ‘Trese’ stint defended by voice actor Inka Magnaye
Synology NAS: A photo storage and multimedia server for your home
Palace: Duterte to announce new quarantine classifications; ‘normal’ GCQ likely in NCR Plus
Alex Eala wins Grand Slam on Independence Day: ‘I hope I made my contribution to the country’
3 die, 110 recover from COVID-19 in Aurora province
MOST READ
‘Hindi pwedeng take 2,’ Sotto tells presidential, VP aspirants
Not even found in Tiktik: Another bad word snuck into DepEd materials
Lacson: Kind-hearted Leni ‘in it to win’ presidency in 2022, but…
Sotto, Villanueva react to LGBTIQ+ promise not to give them votes
Don't miss out on the latest news and information.