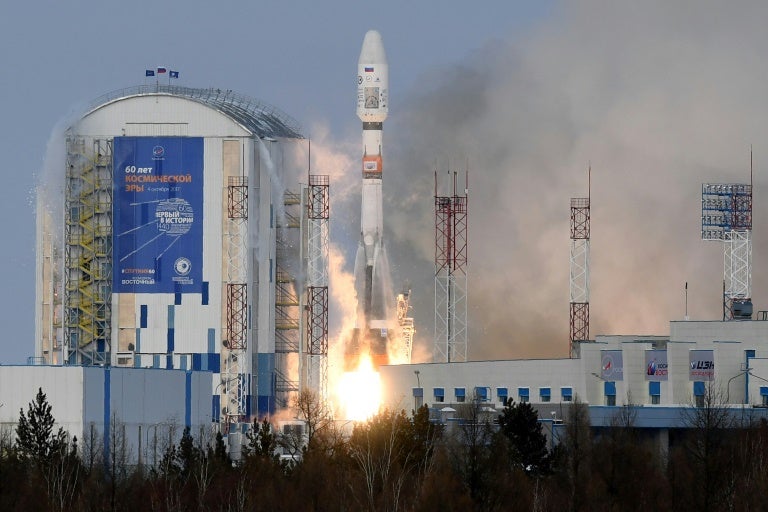 National television broadcast live footage of the launch, showing the rocket taking off into a grey sky.Image:  Kirill Kudryavtsev / AFP

Russia said it had lost contact Tuesday with a weather satellite just hours after it was launched from its Vostochny cosmodrome, in only the second rocket liftoff from the new spaceport.

The glitch was a fresh embarrassment for the Kremlin and emblematic of problems plaguing Russia’s beleaguered space program which has suffered a series of setbacks over recent years, experts said.

Apart from the Meteor weather satellite, the rocket carried 18 payloads from institutions and companies in Canada, the United States, Japan, Germany, Sweden and Norway.

“During the first scheduled communication session with the space vehicle, contact has not been established because it is not on its planned orbit,” the Russian space agency Roscosmos said.

Roscosmos representatives declined to provide further comment, saying only that specialists were looking to determine the cause of the problem.

But an industry source, speaking to Interfax news agency, chalked up the glitch to a human error, saying that the rocket booster and the satellite had likely tumbled into the Atlantic Ocean.

“According to preliminary data, there was a mistake in the flight task of the carrier rocket and the Frigate booster,” the source was quoted as saying.

President Vladimir Putin’s spokesman Dmitry Peskov said he did not have immediate information about the cause of the accident.

Marking another milestone after the inaugural liftoff last year, the Soyuz rocket carrying the weather satellite and other payloads took off at 2:41 pm (0541 GMT) from far eastern Russia.

Roscosmos said after the liftoff that “all the initial stages of the rocket’s flight went according to plan”.

National television broadcast live footage of the launch, showing the rocket taking off into a grey sky in the Amur region near the Chinese border.

The first launch from Vostochny spaceport took place in April 2016, with Putin overseeing the takeoff.

It represented a major development for the country’s space sector, with the new cosmodrome touted to mark a rebirth of an industry plagued by a string of embarrassments.

The first satellite launch had been scheduled for late 2015, but setbacks forced authorities to review the timetable.

The Kremlin’s goal is to ease Russia’s dependence on Baikonur in Kazakhstan, a launchpad Moscow has been forced to rent since the collapse of the Soviet Union.

Russia is also home to the Plesetsk cosmodrome in the north, which is used for satellite launches and missile testing.

But Vostochny, like Baikonur, is closer to the equator, making launches cheaper and more energy-efficient.

The new cosmodrome currently has one launchpad for the Soyuz, the only rocket being used for manned space flights.

Deputy Prime Minister Dmitry Rogozin, who was in Vostochny for the liftoff, chaired a meeting Tuesday addressing the next construction phase to build a reinforced launchpad for the new Angara rocket.

“This is work in the interests of (reaching) Mars,” Rogozin was quoted as saying by Russian news agencies. “This is a flight to Jupiter and so on.”

The launch of the Angara, which is being tested to replace the ageing Proton workhorse rockets, is scheduled for 2021.

Moscow hopes that the Angara will also play a role in helping create the infrastructure of a spaceport in lunar orbit as Russia and the United States agreed in September to cooperate on a NASA-led project to push further into the solar system.

The third launch from Vostochny is scheduled for December 22.

‘As good as Ladas’

Construction on the new spaceport began in 2012 but has been marred by labor disputes, corruption scandals and delays.

Independent space expert Vadim Lukashevich said Russia’s once mighty space industry has been beset by numerous problems including lax quality control at production facilities and a bungled reform of the national space agency.

“This is stagnation. There are no breakthroughs,” he told AFP, pointing out that Roscosmos was currently headed by Igor Komarov, who formerly headed AvtoVAZ, the maker of clunky Lada cars.

“Our rockets right now are as good as the Ladas.”

In October, Russia successfully launched from Plesetsk a European satellite dedicated to monitoring the Earth’s atmosphere, the protective layer that shields the planet from the sun’s radiation. AB