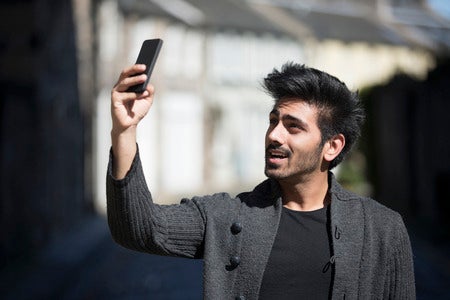 Two researchers tried to confirm if there was any truth to selfitis, a 2014 hoax that labeled the obsessive taking of selfies as a mental disorder.

Janarthanan Balakrishnan of the Thiagarajar School of Management in India and Mark D. Griffiths of Nottingham Trent University developed a Selfitis Behavior Scale based on the levels of selfie obsession put forward by the hoax, namely borderline, acute and chronic.

Their findings were published in the International Journal of Mental Health and Addiction.

The researchers tapped 225 Indian students for focus group interviews to help develop the Selfitis Behavior Scale and to identify factors behind the “disorder.”

Subjective conformity (gaining acceptance within a peer group) had the highest mean score on “acute” selfitis.

Attention seeking, environmental enhancement and social competition had the highest mean scores in the “chronic” condition.

While the study took for granted that selfitis was real based on the definitions of a satirical article, other experts have weighed in and have firmly said that “selfitis” simply isn’t real.

According to the Telegram, Dr. Mark Salter, a spokesman for The Royal College of Psychiatrists, said, “Selfitis doesn’t exist, and it shouldn’t exist.”

“There is a tendency to try and label a whole range of complicated and complex human behaviors with a single word,” he explained.

“But that is dangerous because it can give something reality where it really has none.”

Psychotherapist Amy Morin told Business Insider, “Almost anything has the potential to become an addiction.”

Taking too many selfies should become a concern if it interferes with daily functions like “missing out on face-to-face interactions with friends,” being “late for work” or even being unable to study “because you’re preoccupied with looking at how many likes your latest selfie got.”

If you have friends taking too many selfies, there might not be too much cause for concern. But perhaps for your own peace of mind, there’s Facebook’s new Snooze feature to temporarily mute their posts from flooding your feed. /ra