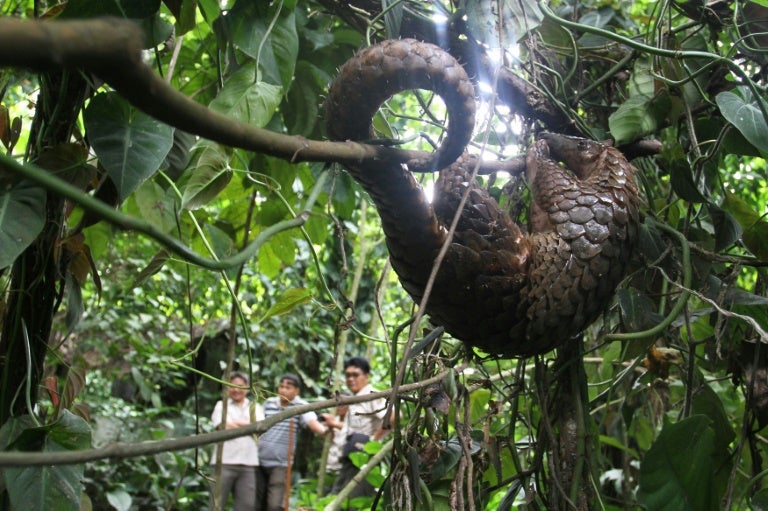 Pangolins in Indonesia are at risk of extinction, a new report says, after finding that 35,000 of the animals were seized by officials in the country between 2010 and 2015. Image: AFP

Pangolins in Indonesia are at risk of extinction because of an illicit trade that sees thousands of the critically endangered animals trafficked each year, a study showed Thursday.

More than 35,000 pangolins — docile, ant-eating mammals with a thick armor — were seized by Indonesian authorities between 2010 and 2015, exposing the scale of the illegal business, the study by wildlife trade monitoring group Traffic said.

Indigenous to parts of Southeast Asia and Africa, the pangolin is prized as an edible delicacy and ingredient in traditional medicine, especially in China and Vietnam, and is the world’s most trafficked mammal.

“Indonesia’s wildlife is being drained on an industrial scale to feed the global illegal trade,” Kanitha Krishnasamy, acting regional director for Southeast Asia, said in a statement.

“While the relatively high number of seizures speaks to Indonesia’s commitment in tackling the problem, it also highlights the relentless poaching.”

The study found at least 127 suspects had been arrested in connection with the trade over six years in Indonesia.

Sumatra was identified as a hotspot and served as a key link to smugglers in Malaysia and Singapore, where the animals were most often sent on to China and Vietnam.

Indonesia’s government said it could not halt the illegal trade alone and urged recipient countries to crack down on importers.

“We are huge archipelagic nation with limited resources to monitor all the sea routes.”

In October, more than 100 live pangolins were seized in a fishing boat off the east coast of Sumatra. Two people were arrested for attempting to smuggle the scaly mammals to Malaysia.

That came after more than 223 live pangolins as well as nine large bags of pangolin scales were discovered in a warehouse near Medan, North Sumatra, in June. AB