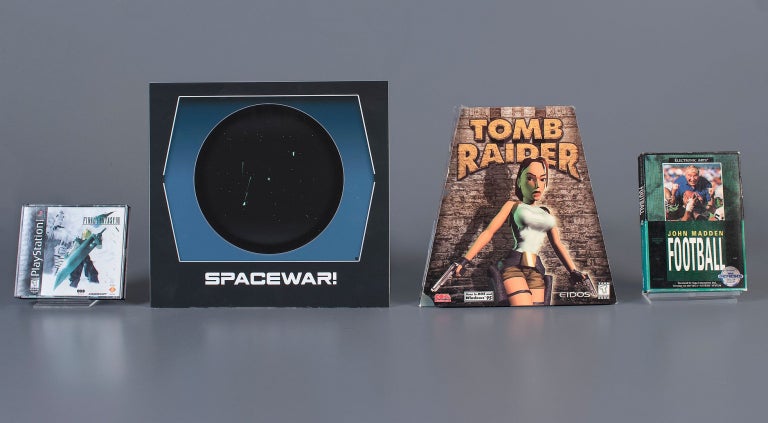 Image: The Strong Museum of Play via AFP Relaxnews

Four more entrants to The Strong Museum of Play’s Video Game Hall of Fame bring the collection’s total count to 20.

“Spacewar”, the world’s first video game made for a minicomputer, small in comparison to a room-sized mainframe installation of the time, was developed in 1962 by a small team operating out of the Massachusetts Institute of Technology.

With action shown on a spherical monitor display housed inside a hexagonal-shaped casing, connected up to Digital Equipment Corporation’s cupboard-sized PDP-1 computer, “Spacewar” was a spaceship combat game for two players, and formed the basis for the first arcade cabinets when “Galaxy Game” and “Computer Space” emerged almost ten years later.

Next up is American Football simulation “John Madden Football”, which celebrates its 30th anniversary this June.

First released in 1988 it was built upon a foundation of realism, from athletes’ individual characteristics and true-to-life playbook formations to audio commentary provided by John Madden himself, college football player, injured NFL draft pick, college and then NFL team coach and, following his retirement, TV sports commentator.

Third on the Museum of Play’s 2018 list is “Tomb Raider” which debuted in 1996 and blended elements from disparate genres to create a fresh puzzle-solving, platforming action-adventure experience.

Its lead character, Lara Croft, was presented as a sexually appealing protagonist (in all her polygonal glory) but in recent years the franchise has begun to redefine Lara as “the epitome of a strong female hero,” according to Museum of Play curator Shannon Symonds.

Finally, 1997’s “Final Fantasy VII” is often referred to as both the spearhead and the pinnacle of Japanese role-playing game development in terms of worldwide appreciation and lasting impact.

It successfully navigated a franchise switch from 2D to 3D graphics, introduced storytelling via cinematic cut-scenes, and established the series’ reputation for bold narrative decisions.

“DOOM”, “Pac-Man”, “Pong”, “Super Mario Bros.”, “Tetris” and “World of Warcraft” inaugurated the collection in 2015, with “Space Invaders”, “Sonic the Hedgehog”, “The Sims”, “The Oregon Trail”, “The Legend of Zelda” and “Grand Theft Auto III” joining the following year.