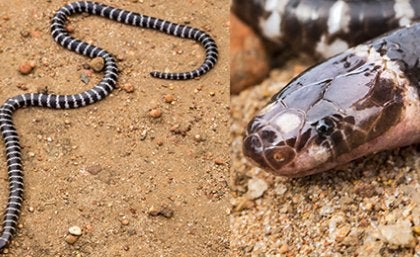 Image: The University of Queensland

Biologists have discovered a new species of venomous snake indigenous to Australia.

The new discovery belonged to the bandy-bandy snake species and is known for their burrowing habits. A team led by University of Queensland associate professor Bryan Fry found the new serpent come out of a concrete block by the sea. The team was studying sea snakes at the time, according to a statement.

They then published their findings in the journal Zootaxa.

Professor Fry was surprised to see the new snake come out of a pile of bauxite rubble at Weipa on the west coast of the Cape York Peninsula. His team would later find two other specimens, one in its native environment and another run over by a car.

However, researchers worry the snake may already be at risk due to the widespread bauxite mining operations in the region. Bauxite is an ore where aluminum gets extracted from.

“Bauxite mining is a major economic activity in the region, and it may be reshaping the environment to the detriment of native plants and animals,” said Fry.

He further stated that such discoveries were important because compounds in venoms could be used for developing new medications. A new species with a different venom cocktail may give researchers in the medical field new ideas in creating medicine for various ailments.

A lost species, on the other hand, could also be a lost opportunity to learn.  /ra