Kathmandu cafes go digital-first with ‘Made in Nepal’ technology 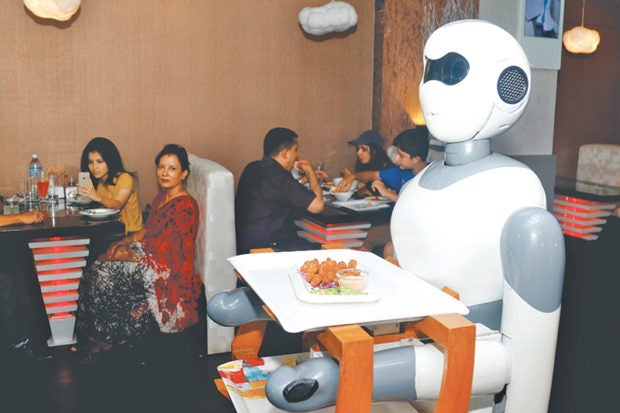 KATHMANDU — If you walk into the aptly-named Naulo Restaurant in Kathmandu’s Durbarmarg, you are in for a novel dining experience. Instead of a traditional hostess, five robot servers will welcome you in and instead of thumbing through a menu, you order food through a monitor placed at every table. Naulo might hold the distinction of being Kathmandu’s first automated restaurant but its futuristic vibe isn’t the only thing that’s drawing in diners—unlike a few other restaurants that also employ robots, Naulo’s five servers have all been built in Nepal.

The brainchild of alums of the Pulchowk-based Institute of Engineering, the robots, Ginger and Ferry, were built by Paaila Technology, a Nepali company that specialises in robotics and AI technology.

“Naulo has been open for two weeks but we had been working on creating a prototype for the past two years,” said Binay Raut, CEO of Paaila. “In that time, we travelled to other countries to research service robots—observing them and catching loopholes—so that when we launched our robot series, it would be an upgrade to the technology that is already out there.”

Paaila Technology, which was established in 2016, first unveiled a prototype, Pari, as an usher at the Nepal SBI Bank last year. But now with the robot servers at Naulo, Niraj Basnet, co-founder of the company, says the technology has become more than just a marketing gimmick.

“At the restaurant, we have been able to digitise all customer-facing services,” Basnet said. “As a result, everything is more systematic and quick. You can expect food to be on your table within 15 minutes of being seated.”

In addition to bringing food and beverages to the table, the robots can also hold basic conversation in English with patrons. The servers also return to their charging stations on their own.

“The robots have been a big hit with diners, particularly the children,” Basnet said “But beyond just being a unique selling point, we believe that the technology could be transformational, with a wide range of applications.”

Once the technology is patented, Basnet said the company hopes to expand to other restaurants in the Valley. Besides, Paaila also plans to set up a branch in China in the long term.

On the other end of town, the Red Mud Coffee in Jhamsikhel continues to use human servers, but instead of taking orders with pens, the paperless restaurant has been using computer tablets to ring in orders directly into the kitchen for the past six years. Using a system designed by the IT company IMS Himalaya Shangrila, Amit Bhandari, the system head at the restaurant, says Red Mud has been able to cut down on the service time, while also improving efficiency.

“When operations become digitized, everything is quicker and more transparent,” Bhandari said “Compared to other restaurants, we have nearly eliminated mix-ups between the floor and the kitchen, which is helping bring down costs.”

Silverline System Integrators, another software company designing Point of Sale systems for restaurants, provides service to 60 restaurants across the country, including some heavy-hitters like the Bakery Cafe and Roadhouse Cafe. The company’s managing director Prabal Kunwar told the Post digitization has reached a critical mass in the country and it’s only a matter of time before it transforms the country’s food service industry.

“It’s been great to see restaurants all over the country, not just in Kathmandu, make the transition,” said Kunwar, whose company recently launched its system in Dubai as well. “But Nepali patrons still like to use cash—and that is perhaps the biggest obstacle in the way of complete digitization.”