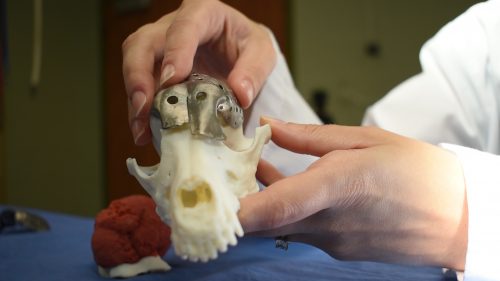 Veterinarians 3D printed a new titanium skull plate for a dog with a large tumor growing out of its skull.

The dog, named Patches, received the new treatment, thanks to the proposed procedure by Dr. Michelle Oblak of the University of Guelph in Ontario, Canada. Oblak was also the surgeon who performed the procedure with help from colleague Dr. Galina Hayes, a small-animal surgeon from Cornell’s College of Veterinary Medicine, according to a statement.

Oblak’s study centered around the idea of examining dogs as a disease model for cancer in humans. She believed animal patients could help speed up the process of making groundbreaking reconstruction procedures available to humans. As for Patches, the dog’s large tumor bump on the head had been in danger of growing into her brain and eye socket so it warranted immediate attention. 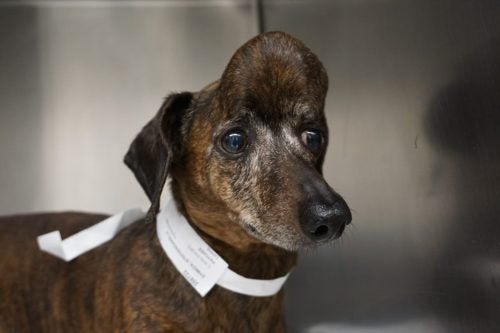 The traditional procedure would have surgeons remove the tumor first, then asses how much damage was done so they could place titanium mesh over the affected area. In this case, over 70 percent of Patches’ top skull had to be removed. Removing the tumor and covering the skull will take time, thereby increasing the danger to the patient.

Oblak’s new procedure involved first doing a CT scan of the dog’s head to create a 3D model. The model was then 3D printed with help from Sheridan College’s Centre for Advanced Manufacturing Design and Technologies. The 3D printed model became a mockup which Oblak could study from every angle before even putting Patches under the knife.

“I could actually figure out before I went into surgery what the defect was going to look like,” said Oblak.

Patches was under the effect of anesthesia for about five hours, during which Oblak took out the tumor and placed the ready-made skull plate to cover the dog’s exposed brain matter. In less than 30 minutes after surgery, Patches was already “alert and looking around.”

Oblak and her team made the procedure available through a veterinarian’s referral to the Ontario Veterinary College’s Health Sciences Center. Animals diagnosed with a skull tumor will first need to be examined by a veterinary surgeon then get a CT scan to see if they are eligible.  /ra