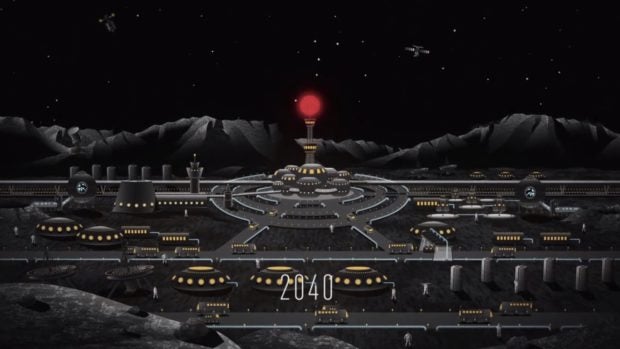 Japanese company ispace has laid out long-term plans to develop and raise a city destination for 10,000 people on the Moon by 2040.

The private lunar exploration startup, which specializes in micro-robotics, recently secured slots on SpaceX’s Falcon 9 rockets to launch a lunar orbiter by mid-2020. This will be followed by a lunar lander with two onboard rovers in 2021, according to the company’s website.

Code-named HAKUTO-R, the program will serve as a sort of survey mission to scout out the lunar surface. The first mission will have the orbiter scan the moon’s surface to validate navigation. The second mission will then use the data from the orbiter to properly land ispace’s two rovers so they can begin surface exploration.

These first two missions will be a kind of technology demonstration for the company, which should help determine areas for improvement before moving forward with the next missions.

The next seven missions planned out by ispace to start by 2022 will see the the construction of an Earth-Moon transportation platform with focus on polar water exploration. The platform should also make it easier to do more lunar landings and transport more payload.

After all the groundwork, mission will focus on the industrial platform where the lunar development proper will proceed in earnest.

Japan is not the only party gunning to have a foothold on the lunar surface. Ars Technica reports NASA and China also plan to send people back to the moon, but these missions won’t happen until around late 2020s or early 2030s.

However the new space race turns out, it appears this generation of space explorers have far more loftier dreams than just getting a lone person to fly into space. They actually plan to live there.  /ra

TOPICS: Falcon 9 rocket, ispace, Japanese company, SpaceX
Read Next
Hacker to delete Mark Zuckerberg FB account on live stream
EDITORS' PICK
BFP raises general alarm over Mandaluyong fire
Someone from the Philippines can become $356 Million richer this Tuesday
Cherry Mobile teams up with Cloud Panda PH, launches online store
Leveling up your ‘lutong bahay’ with the kitchen companion you never knew you needed
Bato de la Rosa, Risa Hontiveros back bill increasing female recruitment quota in PNP
Quarantine violations still punishable despite deleted provisions in ‘Bayanihan 2’ – Bato dela Rosa
MOST READ
‘If I had not been SolGen, I will make you eat your words,’ Calida tells Coco Martin
5 car dealership outlets shutting down
51 percent of German firms holding back investments in PH, but not because of COVID-19
Quarantine passes no longer required under GCQ, but curfew remains
Don't miss out on the latest news and information.