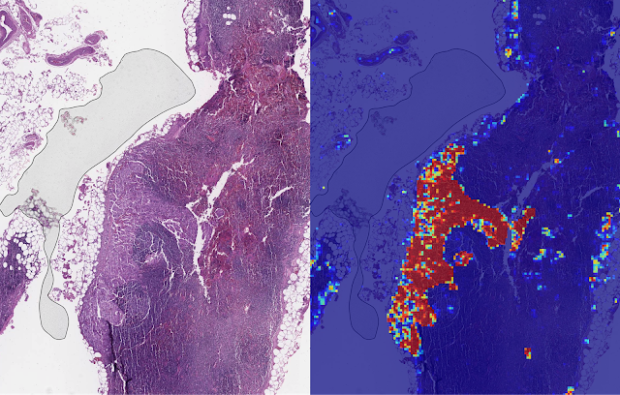 The image on the left shows a slide sample containing cancer cells. The one on the right is the same image as seen by LYNA. The red parts are the cancer cells and the blue are the healthy ones.  Image: Google

An artificial intelligence system developed by Google proved accurate at detecting advanced breast cancer cells and may one day help pathologists with their work.

The AI, called Lymph Node Assistant, or LYNA, was trained using a deep-learning approach. LYNA is able to detect cancer cells around 99 percent of the time and can see suspicious regions too small for most pathologists to consistently detect, according to a statement on Google AI Blog.

However, rather than replace human pathologists, the developers thought of amplifying an expert’s detection rate with LYNA assistance. The developers’ studies showed that a pathologist/LYNA combination detected cancer cells better than LYNA or an expert working alone. LYNA assisted pathologists reduce the rate of missing micrometastases by a factor of two.

LYNA could lift the burden of repetitive identification jobs from pathologists so they can focus on the more challenging and clinical tasks.

While the results proved promising for the application of assistive technology in cancer detection, it will take a while before LYNA can be used in hospitals.

The developers noted that more samples and data sets need to be introduced into the system so that it can accurately detect cancer cells in multiple slide samples.  /ra