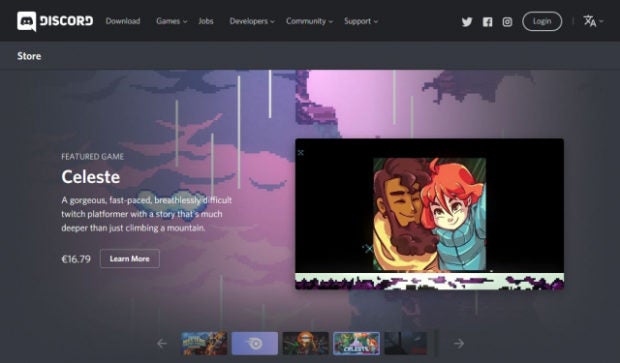 Having prospered as a social chat app oriented towards online video game communities, Discord is now launching a curated in-app store plus a subscription service.

Presented as a gamer-specific alternative to text, video and voice chat apps like Slack, Skype, Teamspeak and Mumble, in three years Discord has gone from niche startup to video game retailer.

Those range from “Dead Cells,” the hit action game by French cooperative MotionTwin, to expansive role-playing adventure “Pillars of Eternity II: Deadfire,” whose studio, Obsidian, is thought to be close to agreeing a takeover by Microsoft.

A selection — including well anticipated Viking migration strategy “Bad North” — are part of a First on Discord program which infers up to three months’ worth of PC exclusivity before being made available on other platforms (such as Steam, GOG, or Humble).

The store also serves as an on-ramp into an overhauled subscription service, Nitro, which, in addition to enhanced chat functionality, now offers a similarly curated library of 60 games to download and play for $9.99 USD per month or around P539 (Nitro Classic, at $4.99 or about P269, confers chat-only benefits).

Naturally, each game on the store and in the Nitro program is also linked up with a certified official game Discord chat.

Going back to the subject of other PC game platforms, Discord also has a solution to the perceived inconvenience of managing multiple game clients — Steam, EA, Ubisoft and Activision all have their own PC software, while GOG’s is an opt-in with a few differences.

Thanks to a Universal Library feature, Discord offers to manage game launching from a central service, further strengthening Discord’s bid to become a central point of reference in PC gaming.

The Discord store was initially launched in August as a beta test project, while Discord Nitro originated as a January 2017 equivalent to Twitch Prime.

Debuting in May 2015, Discord has been backed by investments from Tencent and AT&T’s Warner Media, among others, but has attracted criticism for the presence of white supremacist and harassment-oriented groups within its server architecture.

Steam responded with its own, Discord-esque overhaul to Steam Chat in July 2018. AB