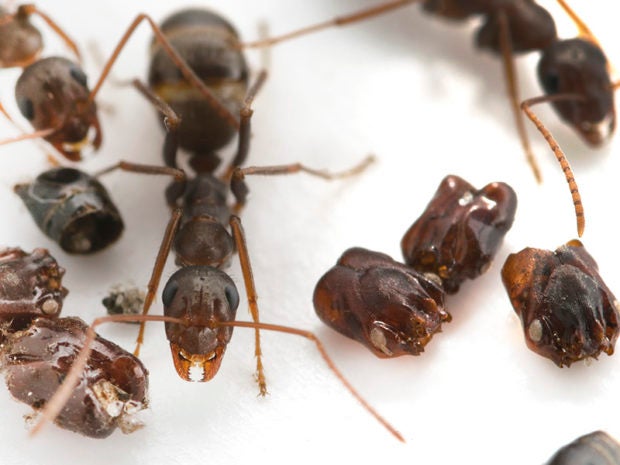 An ant species found in Florida has fascinated scientists with its habit of collecting and displaying the heads of other ants as decoration for their nests.

The Florida ant species, known as Formica archboldi, revealed some of its decor secrets in a study conducted by North Carolina Museum of Natural Sciences and North Carolina State University scientist Adrian Smith, according to a statement.

Smith’s study found that F. archboldi preferred to attack a member of the trap-jaw ant species and paralyze it with a formic acid spray. Once paralyzed, the trap-jaw ant gets carried into the nest where it will be dismembered. Over time the interior of the F. archboldi nest gets filled with body parts from “hunted” trap-jaw ants.

The odd behavior was first observed in 1958 after scientists first described F. archboldi. At the time, the scientists assumed the body parts were leftovers after a trap-jaw ant colony abandoned their nest and the F. archboldi simply moved in.

Trap jaw ants, unlike F. archboldi, were known as insect predators, so it made sense that the less aggressive ant moved in only after the fiercer hunter moved out.

Smith found that the F. archboldi mimic and match with the chemicals the trap-jaw ant released. F. archboldi turned out to be a specialized hunter that made full use of its formic acid spray to get the better of the bigger, more aggressive trap-jaw.

The study served as a hint to how ant species evolve to make the most out of chemical diversification and mimicry. Further study could reveal how much more complex the ant world is believed to be.  /ra