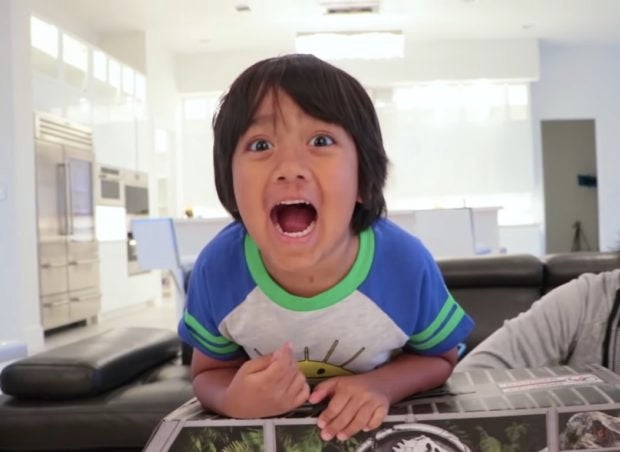 Ryan, the 7-year-old YouTube star, earned over $22 million (around P1.2 billion) by just playing with toys and telling other kids about them.

The young online star, and presumably his parents, used a fairly simple concept to earn his millions: have a kid give a kid’s perspective about kids’ toys. From March 2015, the YouTube channel Ryan ToysReview grew to prominence and now commands over 17 million subscribers.

Ryan’s current earnings of $22 million is 12 months’ worth of income leading up to June 1, 2018. He is also the eighth-highest paid YouTube Star to date. as reported by Forbes.

The income came mostly from pre-roll advertising on his YouTube channel and Ryan’s Family Review. The revenue goes up every time views go up and his videos often average around 10 million views for a 10-30 minute footage. The smaller portion of Ryan’s income came from sponsored posts.

As a minor, 15 percent of his earnings are funneled to what’s called a Coogan account. There his money will be protected until Ryan is of legal age. Some of his earnings then go to production fees and for purchasing toys for the show.

Ryan’s videos are part of an unboxing trend where content creators film themselves opening up consumer goods, toys and gadgets while providing feedback and their impressions of the product for the viewer’s reference. Such videos can help potential buyers of such items decide whether it’s something worth spending money on.

The approach varies from straightforward to a more emotion-fueled footage. In Ryan’s case, it appeared letting him be as a child would be around toys that clicked with viewers. In a way viewers, who are around the same age as Ryan, identified with him so they tune in to the unboxing videos.

Chas Lacaillade, the founder and CEO of Bottle Rocket Management, which represents many unboxers, though not Ryan, said, “Unboxing videos provide the proxy for actually experiencing the joy of receiving and opening something you really desire; this is especially true for items that are out of reach or unattainable.”

Lacaillade added, “The next best thing to owning one is experiencing it virtually, seeing someone else play with it.”

Away from the camera, Ryan signed up with kids’ entertainment studio Pocket.watch in 2017. Just this August, the Ryan’s World toy and apparel collection exclusive to Walmart was launched. Then in October, he inked a deal with Amazon and Hulu to repackage and distribute some of his YouTube channel content.  Alfred Bayle /ra

Panelo: Duterte didn’t downplay COVID-19, just careful not to cause anxiety to people