Leaf-cutter ants build superhighways to transfer food and building materials hundreds of meters without communicating with each other, scientists claimed Wednesday, in findings that could prompt a rethink about how some insect communities organize themselves. 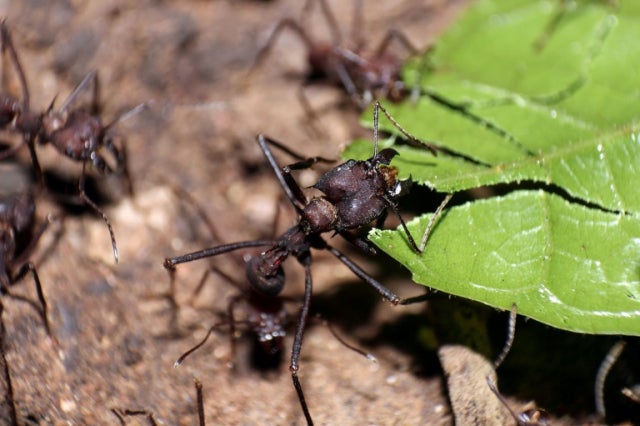 Each leaf-cutter colony can carve out nearly three kilometres of trails from the forest floor every year, investing an average of 11,000 hours into constructing and maintaining them. Image: Thomas BOCHYNEK – Northwestern University/AFP

Each leaf-cutter colony can carve out nearly three kilometers of trails from the forest floor every year, investing an average of 11,000 hours into constructing and maintaining them.

It had long been thought that the ants, which are native to south and central America, organize megaprojects by communicating with one another, assigning specialists to remove debris and retrieve leaf matter.

But an international team of researchers made a startling discovery while investigating the behavior of one of nature’s most impressive engineers.

Far from communicating individual tasks as part of an overall plan, the ants appear to manage large-scale infrastructure projects with no coordination at all.

In other words: each ant seems to act alone, solving environmental problems such as removing obstructions as they are encountered.

“Although many thousand individuals contribute to the construction of infrastructure, there is no communication or organization between them — the massive foraging trails are a byproduct of the foraging behavior,” said Thomas Bochynek, from Northwestern University’s department of electrical engineering and computer science. 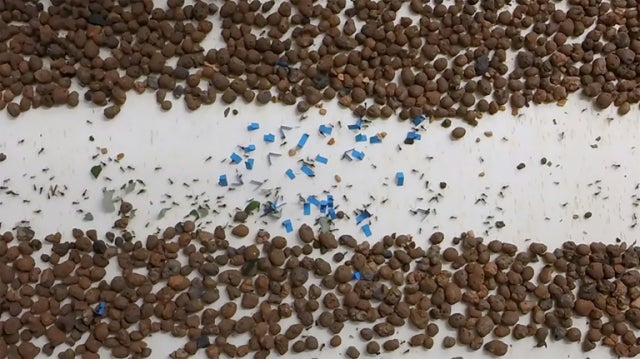 The team monitored colonies of leaf-cutter ants in the lab and in nature to see how fast they cleared a transit path through debris and how many ants pitched in at a given time. Image: Thomas BOCHYNEK – Northwestern University/AFP

“This is surprising, because many collective behaviors are organized by communication,” he told AFP.

The behavior of social insects such as ants, bees and termites is usually considered to be governed by stigmergy — self-organization through direct or indirect communication among individuals.

Ants, for example, were long thought to organize building projects via pheromones left behind by each insect as a set of instructions for other colony members. But several studies have since cast doubt on this theory.

Bochynek and his team monitored colonies of leaf-cutter ants in the lab and in nature to see how fast they cleared a transit path through debris and how many ants pitched in at a given time.

They also built a computer model to hypothesize a typical, randomized rate of clearance based on each ant’s likelihood of encountering an obstruction by chance and then clearing it.

If the ants communicated specific commands between themselves to clear a particular blockage, the removal rates would speed up or slow down, depending on whether they were chatting it up or working together.

But the opposite was true: the team found a virtually linear increase in the number of removed objects over time, something that would be “inexplicable” were the ants coordinating.

The notion that some collective behaviors — even the kilometer-long ant highways — can be achieved without any communication is relatively new, and Wednesday’s study in the journal Proceedings of Royal Society B lends it weight.

Bochynek said the research could point to the simple, evolutionary energy-saving principle of: “If you do not need to communicate, don’t!”

“It saves the energetic expenditure of performing the behavior and reduces the required complexity in the individual animals,” he said.

Trail clearing, while costly in terms of time, has been proven to be “energy-cheap” for ants as it greatly reduces the future costs of obtaining food.

Bochynek hopes for further inquiry into how insects maximize energy and conduct large-scale projects without any apparent instruction.

“Biologists and computer scientists are impressed by the fact that complexity in a group can come from simple individuals, because it is so different from our own society,” he said.

“Showing that we can further reduce the minimum amount of complexity required in an individual to still see complex group behavior is hence exciting and makes the trail clearing example more impressive in our opinion.” NVG

Ants tell you about the environment