LOS ANGELES — Did people domesticate dogs or was it the other way around? And why do these two species seem to think so much alike, act so much alike and get along so well?

The California Science Center has spent the past five years sniffing out the answers to those and hundreds of other vexing canine questions. It will begin revealing the conclusions Saturday with an ambitious, if somewhat lighthearted, new exhibition called “Dogs! A Science Tail.” 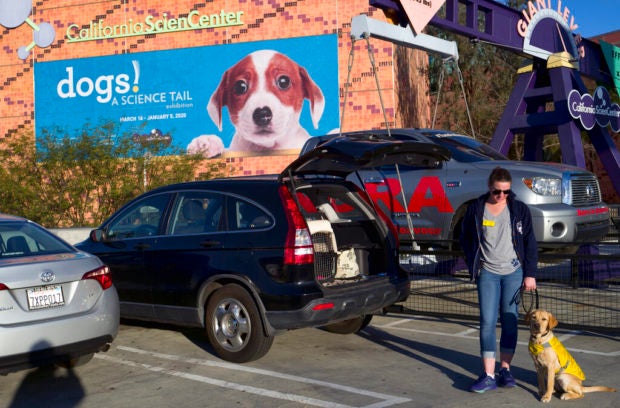 In this Tuesday, March 12, 2019 photo Puppy raiser for Guide Dogs of America Lexie Dreyfuss and her 6-month-old Labrador Retriever Hathi prepare for a demonstration at the California Science Center in Los Angeles. Image: AP Photo/Richard Vogel

And, yes, real dogs will be there. (Just try hiding contraband from that drug-sniffing dog and see what happens.)

“It’s really not about just dogs and science. It’s really about how dogs and humans are both social animals. About how dogs and humans have evolved together over thousands of years. And the fact that because we are both social animals, we’ve learned to work together,” said Jeffrey Rudolph, the center’s president and a devoted dog lover who worked for years to pull this show together.

As he spoke during a recent pre-opening walkthrough of the exhibit, he paused briefly at what he imagines might be its most popular stop for the pre-teen crowd — a replica of a fire hydrant next to a button that you can push to smell what a dog smells.

“But we just smell pee,” Rudolph explained with a laugh. “A dog can tell what dog was there, what time they were there and actually which direction they were going.”

It’s one of the ways dogs can evaluate how safe the surroundings are. It’s also how they manage to mark time without wristwatches or smartphones.

“They have an amazing ability to learn information,” continues Rudolph, noting the 300 million sensory receptor sites they carry in their noses far outnumber our 6 million.

Nine similar stations allow people to see like a dog does (their color vision is limited, but they pick up motion better than us), determine what a person has just eaten by licking their hand and hear sounds so subtle we’re oblivious to them. 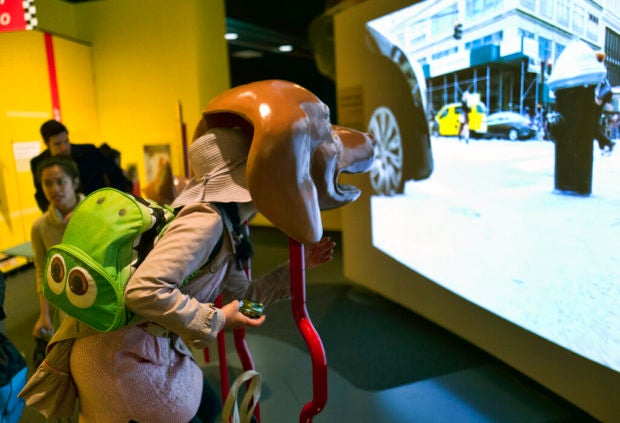 In this Tuesday, March 12, 2019 photo, a visitor takes part in an immersive experience showing visitors how dogs see from inside the head of a dog at the California Science Center in Los Angeles. Image: AP Photo/Richard Vogel 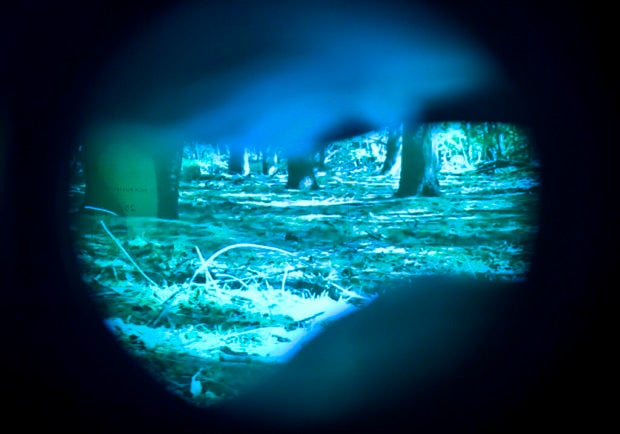 This Tuesday, March 12, 2019 photo shows what a dog’s vision is inside an immersive experience showing how dogs see at the California Science Center in Los Angeles. Image: AP Photo/Richard Vogel 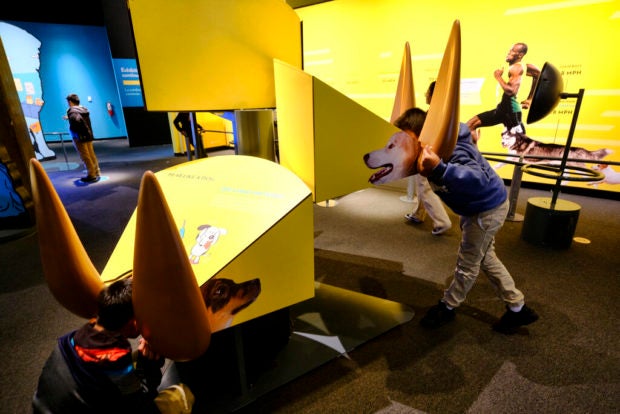 In this Tuesday, March 12, 2019 photo students listen in on how a dog hears the world at an interactive display during a preview of a new exhibition called “Dogs! A Science Tail”, at the California Science Center in Los Angeles. Image: AP Photo/Richard Vogel

“In a bedroom, they can hear a termite scratching on the wall,” Rudolph says.

Such skills allow an avalanche rescue dog to sniff out a person buried in snow in a minute’s time while its handlers stand there without a clue. They can sniff out bombs people would never find until they exploded.

But those are the highly trained working dogs, like those shown in the center’s Imax Theatre, where the Cosmic Picture film “Superpower Dogs” will play throughout the exhibition’s run.

As Captain America actor Chris Evans narrates, viewers watch dogs from around the world help save people from drowning off the coast of Italy, rescue people trapped in collapsed buildings, even track down Kenyan poachers preying on endangered elephants and rhinos.

In the museum itself, people could watch Garmin, a 2-year-old golden Labrador retriever who is about to graduate from guide-dog school, take blindfolded folks through a maze of obstacles during a demonstration earlier this week.

When one person hesitated, Garmin pulled gently on his leash as if to say, “Come on, let’s go. I’ve got this.”

Depending on the day, there will be therapy dogs, rescue dogs, drug-sniffing dogs and others demonstrating their abilities.

For those more interested in mutts like the one sleeping at the foot of their bed, there is also plenty to see, including a small gallery of original dog paintings by legendary American artist Norman Rockwell. They are on loan from “Star Wars” filmmaker George Lucas.

Although “Dogs! A Science Tail” will travel to museums across the country after it closes in Los Angeles early next year, the California Science Center is the only place to see the paintings until Lucas opens his own Museum of Narrative Art down the street in 2021.

But do those dogs that Rockwell immortalized playing with kids, comforting owners, even comically tying up traffic in a crowded Los Angeles alley in 1949, really love us?

Or are they just trying to wheedle another treat when they open those big black eyes of theirs and give us that look?

“If you look a dog in the eye, a dog will look back at you and you will produce oxytocin,” Diane Perlov, the center’s senior vice president for exhibitions, says of the chemical known as the love hormone because of the feelings it evokes in people.

“And,” she adds, “the dog will produce oxytocin in his own body from looking back at you. It’s a mutual affection.”

A chimp, on the other hand, will just look away.

So who launched this enduring love affair that has resulted in dogs and people sharing living quarters in more than 60 million American households?

Scientists can’t quite figure that out. They know dogs descended from wolves and that wolves and people crossed paths more than 10,000 years ago, says Perlov, an anthropologist.

Both wolves and people could see the other was pretty good at hunting for food. But did the wolves walk up and offer their help in that endeavor? Or did people make the first move?

Whoever did, they created an enduring bond.