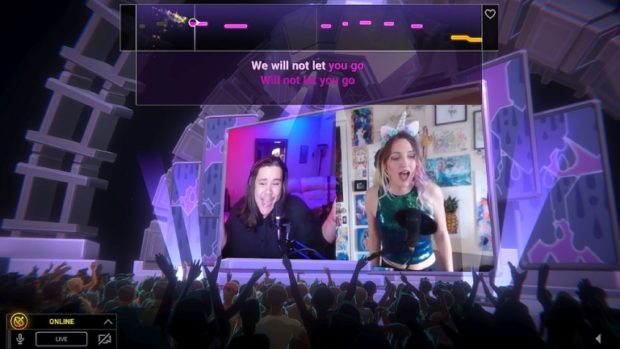 “Twitch Sings”, a free karaoke game designed for Amazon’s streaming platform Twitch, lets singers appear as themselves, using their setup’s camera feed, or as an animated avatar, and sing to an audience that can cheer them on or tip them in response.

The curtain's up and the stage is yours. Twitch Sings is now available to everyone: https://t.co/WXUdijDKhB pic.twitter.com/jOYgjSOhI6

Viewers can make song requests and set challenges, and they can trigger virtual lighting, stage and crowd effects through the use of emotes, the virtual Twitch currency called Bits and channel subscriptions and monetary donations.

While solo performances are live, duets are made with a bit more behind-the-scenes planning. One Twitch streamer is required to record their part and then send it to the other streamer, who will record their part. The “Twitch Sings” app, a program for Windows personal computers (PCs), will then blend the two streamers’ voices together.

“Twitch Sings” had been in a beta testing phase since shortly after its announcement at TwitchCon in October 2018. It launched at TwitchCon Europe over the weekend.

The karaoke game comes after Chinese smartphone app “TikTok” spent 2018 attracting a worldwide community of users who would upload short music-oriented videos that could be shared among friends and fans both on “TikTok” and elsewhere.

Following March’s virtual reality beat shooter “Audica” and April’s “Twitch Sings”, Harmonix is to release a virtual reality (VR) edition of choreography game “Dance Central” across the Oculus line of headsets in the near future, with Oculus to feature during the April 30 and May 1 F8 Connect conference run by parent company Facebook. CE/MKH

As TikTok videos take hold with teens, parents scramble to keep up