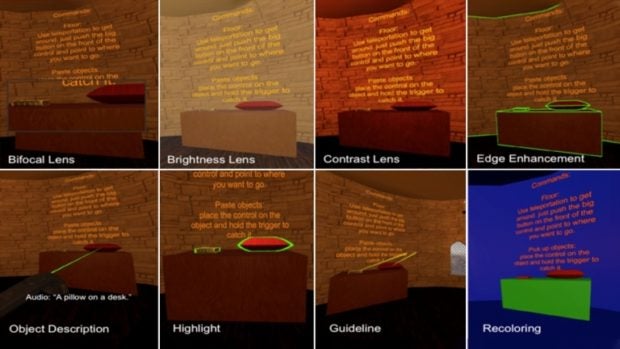 Advancing accessibility on the web, in virtual reality, and in the classroom. Image: Microsoft via AFP Relaxnews

At a conference in Scotland next month, Microsoft researchers from the United Kingdom will be presenting and demoing the tools they have been developing for virtual reality (VR) headsets to make the experience more accessible and enjoyable for those with low vision.

In May, Microsoft’s Redmond and U.K. labs will be presenting at the ACM CHI Conference on Human Factors in Computing Systems with their university collaborators a series of tools, features and technologies that were designed to make VR more inclusive by supporting those with sensory disabilities.

According to the World Health Organization, 217 million people across the world suffer from a “visual disabilit[y] that cannot be fully corrected by glasses.” To make VR more accessible to this range of users, researchers developed a toolkit called SeeingVR that consists of 14 tools for the Unity VR development platform (the most popularly used platform) that give people the ability to uniquely adjust a digital scene by magnifying, brightening or saturating it, for example.

In addition to improving VR accessibility for those with low vision, Microsoft is working on a technology that will give those who are completely blind a fruitful VR experience, as well, by focusing on spatial audio technology. Progress of this work will also be presented at CHI 2019.

The 2019 ACM CHI Conference on Human Factors in Computing Systems will take place in Glasgow, Scotland, from May 4 to 9. CE/JB

Learning about depression via VR tools