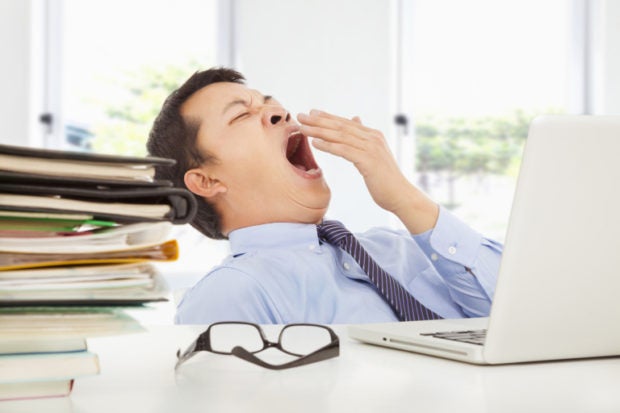 Still in the pilot phase, the test examined a small sample of 40 people, half of whom suffered from chronic fatigue syndrome. Image: Istock.com/Tomwang112 via AFP Relaxnews

Scientists at Stanford University in the United States are developing a blood test using a biomarker that allows doctors to diagnose chronic fatigue syndrome.

Chronic fatigue syndrome (CFS) is expressed through a feeling of profound fatigue, but also with headaches, difficulties concentrating or sleeping, and joint pain. While the symptoms are well known, the illness remains difficult to identify.

“When individuals with chronic fatigue syndrome seek help from a doctor, they may undergo a series of tests that check liver, kidney and heart function, as well as blood and immune cell counts. All these different tests would normally guide the doctor toward one illness or another, but for chronic fatigue syndrome patients, the results all come back normal,” said Dr. Ron Davis, professor of biochemistry and genetics at Stanford University and co-author of the new study.

Published in the Proceedings of the National Academy of Sciences (PNAS) scientific review, the research examined a small sample of 40 people, half of whom suffered from CFS. Researchers analyzed blood samples from volunteers using a “nanoelectronics assay,” a tool equipped with millions of electrodes designed to contain simplified blood samples composed of immune cells and blood plasma.

Scientists subjected the cells to stress by adding sodium to the samples, then compared the response of the experiment group’s cells with those of the control group. The results suggested that all the blood samples from CFS patients generated a “spike in electric current,” while those from volunteers without CFS remained “relatively stable.”

In this case, a change in electrical activity indicates a change on a cellular level. However, a high level of cell activity may suggest the organism has difficulty effectively defending itself against stress.

“We [do not] know exactly why the cells and plasma are acting this way, or even what [they are] doing. But there is scientific evidence that this disease is not a fabrication of a patient’s mind. We clearly see a difference in the way healthy and chronic fatigue syndrome immune cells process stress,” said Davis.

The next step will be to test this method on a larger cohort of patients. The authors of this study also hope to use their test to develop potential treatments to improve medical care for CFS sufferers. CE/JB

TOPICS: blood test, chronic fatigue syndrome, diagnosis, Scientists, stress
Read Next
SpaceX capsule was destroyed in ‘anomaly’–lawmaker
EDITORS' PICK
Quick chat with Nicole Andersson: ‘You really don’t need much to be happy’
IATF to LGUs: Issue ordinances vs attacks on frontliners, COVID-19 patients
10 Filipinos positive for COVID-19 in UK, 7 in Ireland — envoy
Nograles: Cabinet members to donate 75% of monthly salary to aid COVID-19 fight
Diokno to Duterte: OK to make fun of buck tooth, but focus on people’s needs first
Robredo spox thanks Duterte for defending VP’s efforts vs COVID-19
MOST READ
Sotto on Isko Moreno’s call: We do our job without the media following our every move
ADB warns PH against prolonged lockdown
6 PH hospitals to receive FDA-approved test kits from UP
Duterte fires PACC’s Luna for urging NBI to probe Robredo
Don't miss out on the latest news and information.