Known as the PC Engine in Japan and the TurboGrafx-16 in North America, distribution issues and the dominance of Sega and Nintendo meant NEC’s late 1980s home console could not find the international audience it might have otherwise deserved.

Still, it was home to a selection of impressive arcade conversions and original releases, including foundational shoot-em-up “R-Type”, a censored yet nevertheless controversial edition of slasher movie homage “Splatterhouse”, and the first and best version of vampire-hunting escapade “Castlevania: Rondo of Blood”. 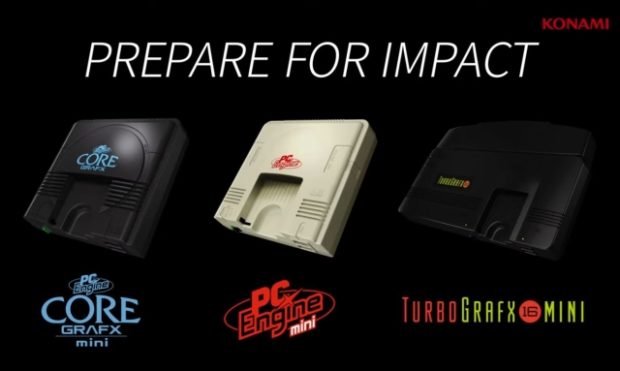 The PC Engine Core Grafx Mini, PC Engine Mini, and TurboGrafx-16 Mini side by side. Image: Courtesy of Konami via AFP Relaxnews

It also hosted the first three games in the “Bonk” or “BC Kid” caveboy platformers debuted on PC Engine, its Japanese title a play on the console’s name, plus a remastered collection of cult role-playing adventure “Ys I & II”, and an accomplished 1990 reboot of the “Bomberman” franchise.

Thirty years on from the birth of the PC Engine and Konami, which had provided “Rondo of Blood” as well as classic shoot-em-up “Gradius” for the machine, is now in charge of producing an all-in-one retro remake.

Its initial product reveal confirms the existence of three different editions according to international region: the TurboGrafx-16 Mini in North America, the PC Engine Core Grafx in Europe (where, in France, the forerunner to modern games giant Ubisoft had managed to secure Japanese imports), and the PC Engine Mini in Japan.

At reveal, just six games are being announced for the console, which awaits a price, projected launch date, and details surrounding multiplayer options — the original consoles only shipped with one controller port.

As Konami now owns PC Engine co-creator company Hudson Soft, it is highly likely that the “Bomberman” and “Bonk” series will be represented in the mini console’s line-up when it does eventually release. RGA/JB